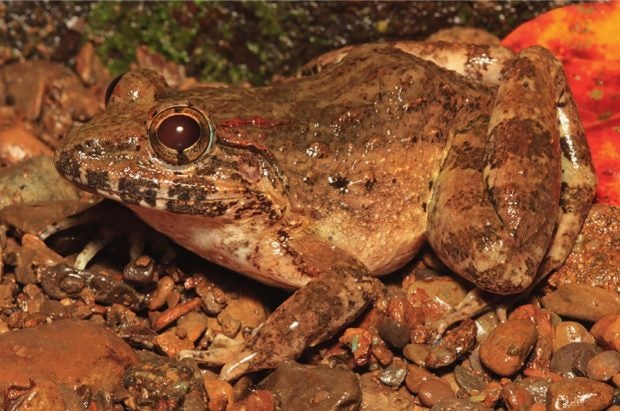 MANILA, Philippines — A new “cryptic” species of fanged frog from the Southwestern Tagalog Region, previously deemed identical to another species from a different region, was recently discovered by researchers from the University of Kansas.

A paper from the University of Kansas by doctoral student and lead researcher Mark Herr and colleagues Johana Goyes Vallejos, Camila G. Meneses, Robin K. Abraham, Rayanna Otterholt, Cameron D. Siler, Edmund Leo B. Rico, and Rafe M. Brown claimed that the “Mindoro fanged frog” or Limnonectes beloncioi species — known to be native to the Mindoro and Semirara Islands hence its name — has some characteristics that are very distinct to its previous classification.

“This is what we call a cryptic species because it was hiding in plain sight in front of biologists for many, many years,” said Herr in an article published in the university’s news service.

According to the study published in the peer-reviewed journal Ichthyology & Herpetology last month, the Mindoro fanged frog shares multiple characteristics and is “morphologically indistinguishable” from its close relative from Palawan called the Acanth’s Fanged Frog or Limnonectes acanthi.

“Scientists for the last 100 years thought that these frogs were just the same species as frogs on a different island in the Philippines because they couldn’t tell them apart physically,” Herr added.

However, since the fanged frogs were located in two islands that are miles apart from each other, Herr and the team decided to analyze the genome from the frog species in Mindoro to see if it will be qualified as to its own distinct species.

Audio recordings conducted by the researchers unearthed the difference in the characteristics of the species’ mating calls – specifically the dominant frequency and temporal properties such as the call’s pulse number and structure.

“They do indeed look identical to the naked eye — however, they are genetically isolated. We also found differences in their mating calls. They sound quite different. So, it was a case of using acoustics to determine that the species was different, as well as the new genetic information,” the lead researcher noted.

But, recording the two frog species’ call proved to be difficult for the team of researchers. Herr shared that they struggled in gathering audio data since the frogs were very wary of them.

“They call at night, but the second a flashlight or human voice wanders into the equation they’re just going to take off — because they know that they can be killed by people.”

“[W]e were lucky in this project that we had people over many years that were out there and had recorded both of these frogs on Palawan and Mindoro. So, we had recordings from both islands, and that’s kind of rare with this group of fanged frogs because people eat them.”

In terms of geology and biogeography, Herr and his associates also attributed the lack of shared gene flow between the two fanged frogs to the fact that “amphibians generally are poor long-distance overwater dispersers” and the two species are “separated by a deep-water channel and have not been connected by land.”

“We ran genetic analyses of these frogs using some specific genetic markers, and we used a molecular clock model just to get a very basic estimate how long we thought that these frogs may have been separated from one another,” said Herr.

“We found they’re related to each other, they are each other’s close relatives, but we found they’d been separate for two to six million years — it’s a really long time for these frogs. And it’s very interesting that they still look so similar but sound different,” he continued.

According to records from AmphibiaWeb, a database for information about every species of amphibian in the world, 13 frog species part of the Limnonectes genus are found in the Philippines.

While there is insufficient data for the Limnonectes micrixalus species, the website noted that the International Union for Conservation of Nature (IUCN) categorized the rest of the species on its Red List of Threatened Species as least concern, vulnerable, near threatened, or endangered.