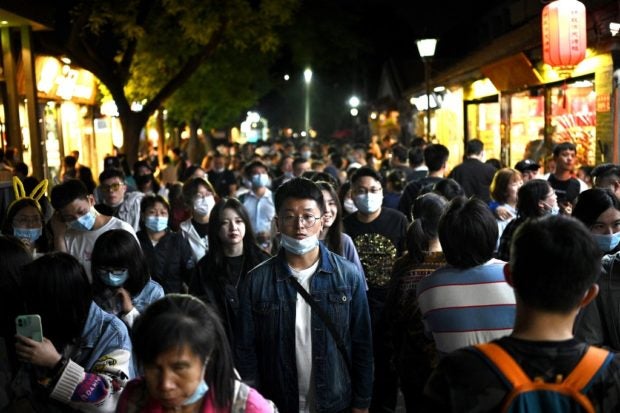 People walk through Nanluoguxiang alley during the Labor Day holidays, which take place from May 1 to May 5, in Beijing on May 3, 2021. Photo by Noel Celis / AFP

BEIJING — China’s population has grown more than five percent over the past decade to pass 1.4 billion people, Beijing said Tuesday, as it unveiled its census results.

China’s birthrate has been in steady decline since 2017, despite Beijing’s relaxation of the decades-old “one-child policy” in order to try and avert a looming demographic crisis.

Ning Jizhe, an official from the National Bureau of Statistics, said “the data showed that the population of China maintained a mild growth momentum in the past decade.”

The increase of 5.4 percent over the last 10 years comes amid fears that an aging population and a slowing birth rate pose a looming demographic crisis for the country.

The 2020 survey was completed in December with the help of over seven million volunteers who surveyed residents door-to-door.

Beijing changed family planning rules in 2016 to allow families to have two children as fears grew about China’s fast-aging population and shrinking workforce.

But there has been growing concern that the policy change is yet to produce the expected baby boom to help offset the country’s aging population.

This is partly due to falling marriage rates in recent years, couples struggling with the high cost of raising children in major cities, as well as women naturally delaying or avoiding childbirth due to their growing empowerment.

And preliminary data published in February suggested the birthrate was also down significantly in 2020, although the number of actual births has not yet been announced.