‘Delivery riders are employees, too’ 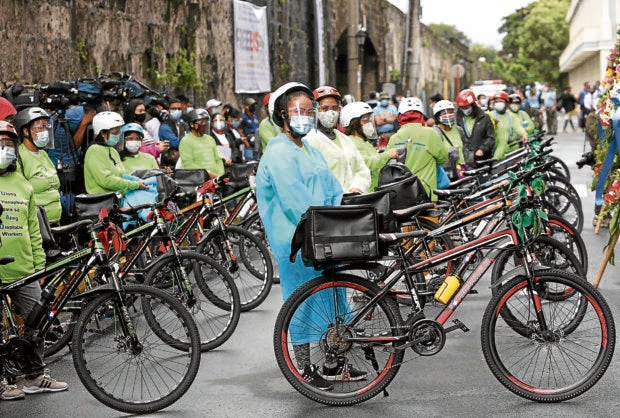 READY TO ROLL A program launched by the Department of Labor and Employment and its partners last year gave these housewives bicycles fitted with thermal bags to help displaced workers or head of families find an alternative source of income in the food delivery business. They also received raincoats, helmets and mobile phones. —MARIANNE BERMUDEZ

“Jerome” worked for Lalafood for nearly eight months, biking to deliver food to customers and strictly following company rules, but he was never its employee.

He joined Lalafood in July 2020 after losing his job at a computer shop. He stayed with the app until Feb.15, the last day of its operations in the Philippines.

An entire household relied on Jerome, 27, to bike as far as he could every day so they could have money for food during quarantine. But sometimes the distance he rode was not enough to make ends meet.

The other breadwinner was his mother, who worked overseas.

Jerome received no separation pay when Lalafood officially went offline. Suddenly, he had no means to support a family of nine, which included a sick aunt and a grandmother.

Speaking with the Inquirer by phone days before the app went offline, Jerome said he had yet to tell his mother that he would be jobless. He said she lost her job abroad last February, too.

“Of course, she would just worry,” he said.

Other Lalafood riders who spoke with the Inquirer also said they did not receive separation pay.

In the company’s terms and conditions, which are publicly available, it is stipulated that a rider “declares he is not an employee, representative, principal, agent, or officer of Lalafood.”

Jerome said he knew what this meant. Still, he said, speaking in Filipino: “You’re really like an employee because the moment you do something wrong, deep inside, you’re worried that they can charge you [with] something.”

Lalafood riders had to follow a code of behavior that specified violations, such as demanding a tip, not dressing properly, and delivering an order late. The penalties ranged from a one-day suspension to an outright ban.

“That’s why I really followed their rules and regulations,” Jerome said.

Other food delivery apps, such as Grabfood and Food Panda, are no different. According to the two companies’ respective terms and conditions, the riders are either their third-party providers or independent contractors, but never their employees.

This is a practice seen in many, if not all, apps in the online food delivery business both here and abroad. But in some countries, such as the United Kingdom and Spain, it is now beginning to be questioned.

Who is, who’s not

Lalafood’s cessation of operations has also raised an important question: With no legal protection, what happens to riders when the app goes offline permanently?

On one hand, the protections of the Labor Code, such as daily minimum wage and separation pay, only apply in an employer-employee relationship, said Arnold de Vera, who teaches labor law at the University of the Philippines College of Law.

But on the other hand, it is also not the company that has the final say on who is its employee and who is not, he said.

“In our law, whether you are an employee or not is not a matter of agreement,” De Vera said in a phone interview.

He cited “four elements” used in court to determine if someone is an employee: “whether he can be hired, he is paid wages, he can be disciplined, and he can be controlled.”

The Department of Labor and Employment (Dole) calls this the four-fold test. Of the four elements, the last one—also known as the control test—is considered most important.

“The so-called ‘control test’ is commonly regarded as the most crucial and determinative indicator of the presence or absence of an employer-employee relationship,” reads Dole’s Department Order No. 147-15, which amended some of the implementing rules and regulations of the Labor Code.

“Under the control test, an employer-employee relationship exists where the person for whom the services are performed reserves the right to control not only the end achieved, but also the manner and means used to achieve that end,” it says.

The control test thus concerns the employer’s power to control an employee’s conduct: what to do in his or her job, and how to do it.

Simply put, De Vera said, based on the four-fold test, riders in the online food delivery business should be considered employees of their digital platforms. This includes Lalafood riders, he said.

While courts may not always see company rules as a form of employer control, De Vera said, any scheme that incentivizes and penalizes employee behavior should qualify as such.

Lalafood’s code of ethics, for example, qualifies as control, he said. So does Grabfood’s policy of requiring riders to keep to a certain completion rate for their weekly trips under pain of penalties such as a one-day suspension, he said.

“[It’s] because they are engaged,” De Vera said. “They are hired. They are paid wages. When they [deliver an order], they get paid. They can be removed from work, and what they do is being controlled [by the app]. In fact, they even have a uniform.”

Riders should be employees of their digital platforms even if their contracts say otherwise, De Vera said.

In Food Panda’s service provider agreement, a provision reads: “The contractor agrees not to bring any employment-related claim or any claim based on worker status against the company or any of its clients.”

The same provision states that the contractor “shall indemnify the company and any of its clients, against any and all liability arising from any employment-related claim or any claim based on working status.”

Asked if such provisions prevent riders from taking legal action, De Vera said a contract does not have the final say on the issue.

He added: “The contract cannot dictate the nature of the relationship between the two, if it’s really employment. The Supreme Court is consistent on this. Whatever is in the contract, if the rider proves he is an employee, then that is employment. Then the Labor Code comes in, together with the liability for employment.”

However, De Vera said, many riders he had talked with initially did not seem to mind the implications of not being considered an employee. He said they cared more about having a job than what the job entailed, especially since they thought they could deliver as many as 10 orders a day.

“You’ll only see [the problem] later, when it rains and you’re riding a bicycle,” he said. “When you use a bicycle [in the rain], 5 kilometers is [significantly] different from 10 km. But you only realize that once you’re on the job.”