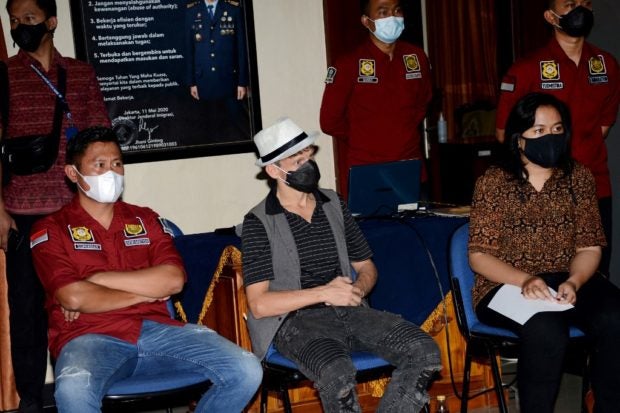 This picture taken on May 9, 2021 shows Christopher Kyle Martin of Canada seated during a press conference by immigration authorities at the international airport near Denpasar before his flight out of Indonesia’s resort island of Bali, after he was expelled for offering an orgasmic yoga class which was considered disrespectful for local traditions and values. (Photo by SONNY TUMBELAKA / AFP)

DENPASAR — A Canadian man has been expelled from Bali for offering an “orgasmic” yoga class after Indonesian authorities said he disrespected local traditions and values.

Christopher Kyle Martin was deported from Indonesia on Sunday after he promoted online a “Tantric Full Body Orgasm” class for 20 euros ($24). The promotion went viral on Indonesia’s social media, irking some conservative groups.

“This activity potentially damages the reputation of Indonesia and Bali as a tourist destination, and is irrespectful of Bali’s customs,” Bali governor I Wayan Koster said on Sunday at a press briefing with Martin seated beside immigration officers.

“If you want to come back here, you have to respect Balinese custom,” the governor told him.

Bali Immigration Office confirmed that Martin, who entered Indonesia in April on a tourist visa, had been deported for disrespecting Balinese culture and traditions.

According to the immigration office, Martin argued that the yoga class would not involve any sexual activity and mainly focus on breathing technique.

The class has been cancelled after the outcry.

Last year, a Syrian yogi was kicked out of Bali for holding a crowded gathering that violated the island’s coronavirus restrictions.