Robredo spokesman scores Roque for dragging her into debate 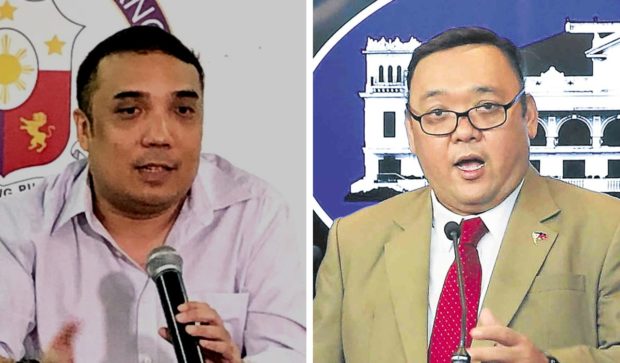 MANILA, Philippines — Vice President Leni Robredo’s camp scored Malacañang for dragging her into debate discussions, saying that it is ironic since it was President Rodrigo Duterte who backed out from his own dare.

Robredo’s spokesperson Barry Gutierrez took to Twitter in pointing out on Monday how administration officials seem to have a lot of time on their hands for them to be issuing such demands, instead of just focusing on work, just as Robredo does.

Gutierrez was referring to the statement earlier of presidential spokesperson Harry Roque who challenged Robredo to a debate after the latter insinuated that the country, under the current administration, lost disputed territories in the West Philippine Sea islands to China.

Duterte earlier backed out of the debate which he himself instigated to challenge retired Supreme Court Associate Justice Antonio Carpio’s claims against his policy in dealing with China. The Chief Executive instead designated Roque to debate in his behalf. However, Roque listed down a number of topics for discussion in the debate.

But Carpio rejected such terms, saying the topics being raised by Roque as precondition for the debate were not being contested by him or anyone, thus, it was “pointless” to debate on them.

The talks on debate stemmed from Duterte’s insistence that he cannot use the country’s victory before the Permanent Court of Arbitration against China amid its recent occupation of Philippine isles and territories at the WPS.

The PCA’s 2016 decision, which ruled that the Southeast Asian country had exclusive rights to the WPS — and that China’s nine-dash line territorial claim has no legal and historical basis.

Duterte had blamed Carpio, former Foreign Affairs Secretary Albert del Rosario, and the past administration for allegedly putting the Philippines in a position to lose the islands.

The President said that he would only ask two questions to Carpio, centering on his recurring allegations that the past administration was the one who allowed China to occupy disputed islands in the WPS and ordered the Navy to retreat from the area.

The next day, Carpio accepted Duterte’s challenge.  Meanwhile, the Philippine Bar Association offered to host the debate between the two.

Eventually, the hashtag #DuterteDuwag — implying that President Duterte is a coward — trended on social media after he placed Roque in his stead.

The hashtag was the top trending topic last Friday, while other keywords related to the issue were also surging

Carpio has repeatedly insisted that the administration must insist on its victory at the arbitral court, but Duterte also claimed that using the decision — which he labeled as a mere piece of paper — would only escalate to a conflict with China, to whom he said the Philippines is indebted.

The latest discussions on the WPS came after the National Task Force on the West Philippine Sea (NTF-WPS) reported the presence of over 200 boats last March — including Chinese maritime militia ships — near the Julian Felipe Reef.

The reef is well within the country’s exclusive economic zone.