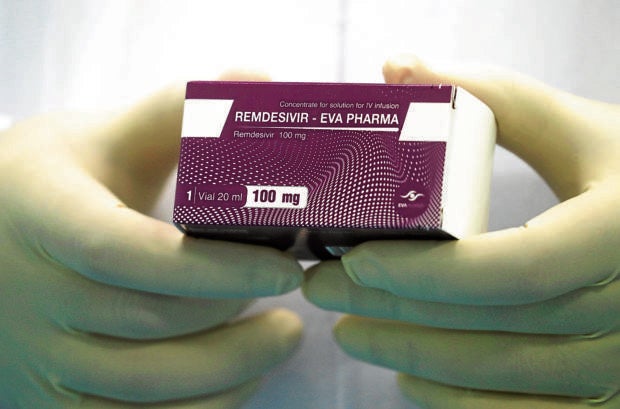 MANILA, Philippines — Two House lawmakers on Sunday criticized the Department of Health (DOH) for still buying P1 billion worth of remdesivir even after the World Health Organization had rejected the use of the drug in COVID-19 treatment.

Anakalusugan Rep. Michael Defensor and House Deputy Speaker Lito Atienza also questioned the DOH’s decision to push through with the transaction, which they described as a waste of money.

“We consider all new purchases of remdesivir as reckless and foolish spending in light of the WHO recommendation, and considering that [the] government is scrounging for money to buy more COVID-19 vaccines and pay for the P2,000 cash aid for every Filipino contemplated under the Bayanihan 3 bill,” Defensor said in a statement.

He warned that further purchases of remdesivir might be deemed as transactions highly detrimental to the government under the Anti-Graft and Corrupt Practices Act.

In a separate statement, Atienza questioned the DOH’s “wasteful double standard” of promoting a very expensive drug such as remdesivir while ignoring other potential low-priced treatments like human-grade ivermectin that he said costs only P35 to P40 per capsule.

The DOH did not respond to requests for comment.

“The DOH should stop importing and using remdesivir. Otherwise, the public will start suspecting that some [DOH] officials are making money on the purchases,” Atienza said.

“Other wealthy nations can throw their money away on remdesivir if they want to, but in our case, we simply can’t afford to,” he added.

Both Atienza and Defensor have been pushing for the use of ivermectin to treat and prevent COVID-19 despite the WHO’s warning that there was not enough evidence to show the antiparasitic drug could be used effectively against the coronavirus.

The issue has also divided the medical community, pitting doctors against each other. In particular, a doctor and Inquirer columnist advocating the usage of ivermectin wrote the Healthcare Professionals Alliance Against COVID-19 (HPAAC) last week to demand that the group “correct… the disinformation you had caused and apologize…”

“If you fail to correct the injustice you had caused the medical volunteers and other ivermectin advocates within 72 hours, then we shall be compelled to exhaust all possible legal remedies to seek redress for this grave injustice,” Dr. Rafael Castillo said in his letter that he also sent to the DOH, Professional Regulation Commission and Food and Drug Administration (FDA).

Castillo, who took part in the April 29 mass distribution of ivermectin led by Defensor in Quezon City, said that he wrote the letter because he wanted to stand up for the other doctors and medical volunteers who favor the use of the drug “but [were] subjected to [this kind of] humiliation and rebuke.”

Not a miracle drug

“We’re not saying that ivermectin is a miracle drug. It’s not. But it’s safe and it may treat COVID,” Castillo stressed, adding that he was only being “pragmatic” given the scarcity of COVID treatments and vaccines.

Around 200 people each got 10 ivermectin capsules from Defensor and Sagip Rep. Rodante Marcoleta during the mass distribution.

Days after, at least 41 medical groups and societies under the HPAAC urged the public not to use the drug and said its distribution was in direct violation of the FDA’s regulatory practices.

“If they are found at fault, we also call on the Professional Regulation Commission to investigate and hold them liable for breaking the law,” the HPAAC said.

But in a phone interview on Sunday, Castillo said the groups had already reached out to him “to resolve the matter among ourselves, a collegial body.”

Dr. Tony Leachon, a former PCP president, said he supported the stand of the medical groups. According to him, he and Castillo have both agreed to disagree.

—WITH A REPORT FROM MARICAR CINCO