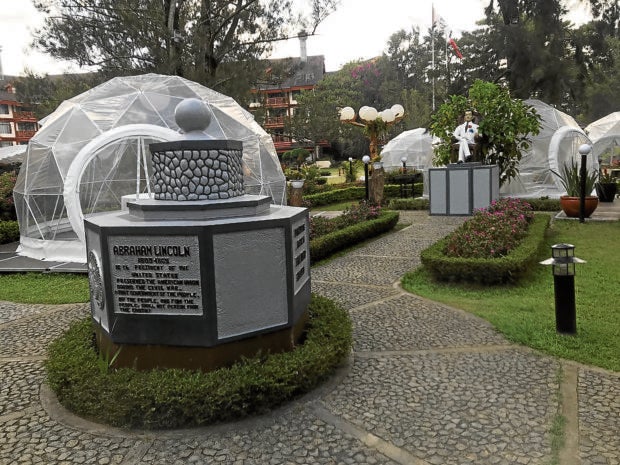 PEOPLE IN BUBBLES Visitors who dine at Camp John Hay’s The Manor can use these containment bubbles at the garden, one of the health innovations put up by the Baguio travel industry to entice tourists. —VINCENT CABREZA

BAGUIO CITY, Benguet, Philippines — This city has developed a new travel bubble with San Fernando City, the capital of La Union province, confident that an exchange of domestic tourists will finally trigger the economic rebound needed by their respective tourism industries.

Baguio Mayor Benjamin Magalong and San Fernando Mayor Alfredo Pablo Ortega signed a memorandum of understanding for the “Summit and Sea” travel corridor, both of whom were present during a launch held in Camp John Hay here on Friday.

Magalong described the strategy as a microversion of the prevailing “Ridge to Reef” bubble of Baguio and the neighboring Ilocos region, which includes La Union.

Baguio plans to take in about 500 tourists from San Fernando daily once the travel corridor starts operating. No date has been set yet as both cities are still harmonizing protocols.

He said the new travel bubble would not replace the Ridge to Reef bubble, which was launched in October last year when Baguio and the Ilocos region reopened their borders for leisure travel that is exclusive to their residents.

Baguio has received over 40,000 tourist applications from residents of the Ilocos region from October last year to February.

But the city’s tourism sector still reels from some P1.6 billion in unrealized revenues due to last year’s lockdown and the ongoing quarantines.

The governments of Baguio and San Fernando have reached out to provincial bus lines to secure government clearances to transport leisure travelers within the new travel corridor, said Baguio tourism supervisor Aloysius Mapalo.

Baguio and San Fernando will also develop a common registration system for travelers and will both require negative COVID-19 test results issued within 72 hours prior to entry.

“Reviving tourism will most assuredly be done safely, surely and steadily. Our goal is crystal clear—to make sure no one, neither residents nor tourists alike gets in harm’s way,” Magalong said.

The mayors of the two cities intend to expand the Summit and Sea bubble to include beaches in the La Union towns of San Juan and Bauang, Ortega said during the program launch.

Tourism Secretary Bernadette Romulo-Puyat, who virtually joined the launch, said domestic tourists preferred outdoor travel that allowed them to swim in the beaches and bike or hike up mountains.