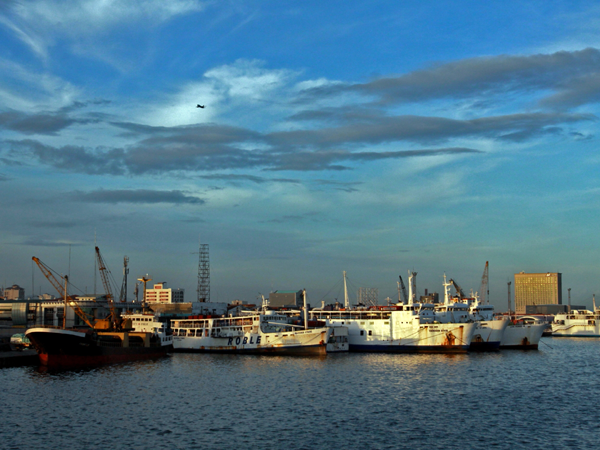 (FILE) Passenger vessels are stranded after the Coast Guard announced the cancelation of trips of inter-island vessels in Manila, Visayas, and Mindanao due to Typhoon Pablo. JUNJIE MENDOZA/CEBU DAILY NEWS

Velasco said he wants the existing guidelines on sea travel during typhoons, specifically during Storm Signal No. 1, reviewed and replaced by a “maritime legal policy that is adoptive, forward-thinking and conducive to economic stability.”

The policy, which was laid down in a memorandum circular issued by the Philippine Coast Guard (PCG) in 2013, is “counterproductive and detrimental to the country’s shipping and maritime industry, and the general public,” according to Velasco.

PSWS No. 1 is put in effect and announced by the state weather bureau when wind speeds ranging from 30 to 60 kilometers per hour are expected to affect a given locality within a lead time of 36 hours.

This, however, does not mean that the corresponding weather conditions are already prevailing over that particular area.

According to Velasco, the 36-hour lead time was originally intended for inland storm preparations involving residences, farms, and land trips, among others.

He noted that advanced gale warning advisories and other maritime-based forecasting technologies and mechanisms are already available and must be maximized in crafting adaptive and economically sustainable guidelines on sea travel — without sacrificing the safety and protection of those in the maritime industry.

This came after a virtual meeting with officials of PCG, Philippine Atmospheric, Geophysical and Astronomical Services Administration (Pagasa), and the Maritime Industry Authority (MARINA) on Wednesday.

The discussion focused on PCG Memorandum Circular No. 02-13 prescribing the “Guidelines on Movement of Vessels During Heavy Weather,” effectively prohibiting any type of boat, ship, or sea vessel from operating or traveling in areas where PSWS No. 1 is declared.

Velasco urged officials of the PCG, Pagasa, and MARINA to look into the possibility of having a shorter lead time for storm signals and movement of vessels during bad weather conditions.

He argued that the current 36-hour lead time for PSWS No. 1 is “quite long” and leads to serious port congestion and derailment of economic activities.

“We need to find a way to be able to adjust how we determine storm warning signals and protocols in allowing vessels to travel by sea without sacrificing the safety of passengers and seafarers,” Velasco said.

The Speaker added that the 36-hour lead time is “inefficient” as it causes people and goods to remain stranded in ports even when the weather is calm or there is still enough time to travel safely.

He said this is mostly the case for people living in islands citing his own province, Marinduque, where inter-island trips can be completed in only an hour or two.

“I take my province as an example. We are used to a scenario where every time Pagasa declares Signal No. 1 in Quezon province, vehicles and Marinduqueños returning home are stuck in seaport,” Velasco said.

“This doesn’t happen only in Marinduque. This also happens in many parts of the country,” he added.

The Speaker suggested that Pagasa designate affected regions into quadrants, as some regions are affected more than others during a storm signal warning.

Areas that are less affected are often burdened by stranded passengers and goods congested in their respective ports, he stressed.

Velasco believes that using a more targeted approach in declaring PSWS No. 1, specifying which area of a particular province or region should be placed under this advisory, can help prevent unnecessary delays in port activities without sacrificing the safety of travelers and seafarers.