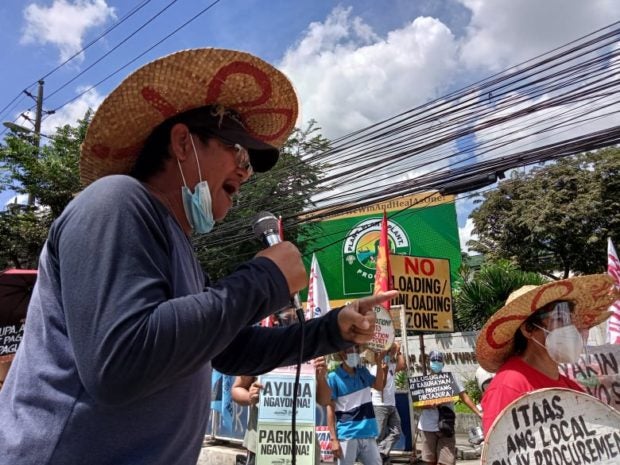 CITY OF SAN FERNANDO, Pampanga – Peasant leader Joseph Canlas was rushed to hospital here on Sunday due to severe  symptoms associated with COVID-19, nearly a month since his detention for alleged possession of illegal firearms and explosives.

Canlas, 59, was hooked to a ventilator in a critical care unit of the Jose B. Lingad Memorial General Hospital after his transfer from a hospital in Angeles City, his daughter Jenelle said in a phone interview.

He waited five hours to get a room at the Department of Health-run facility, Jenelle said.

She said the result of his swab test has yet to be released but initial findings showed him to have acute respiratory failure probably secondary to COVID-19, poorly controlled diabetes and serious hypertension.

Canlas has been detained at the BJMP prison in Camp Tomas Pepito in Angeles City since April 15 following his March 30 arrest.

Canlas, Kilusang Magbubukid ng Pilipinas vice chairman, was arrested in Pampanga at the same time Pol Viuya, chairman of the Bagong Alyansang Makabayan in Central Luzon, was apprehended in Tarlac.

They separately denied owning or having in their possession guns and grenades that the police’s Criminal Investigation and Detection Group and 10 military units said were seized in Canlas’ office and Viuya’s home.

“We firmly believe he would not have suffered like this if he was not made target by this fascist regime hell-bent to silence dissent and attack critics specially people’s leaders,”  the Free Joseph Canlas and Pol Viuya Network said in a statement.