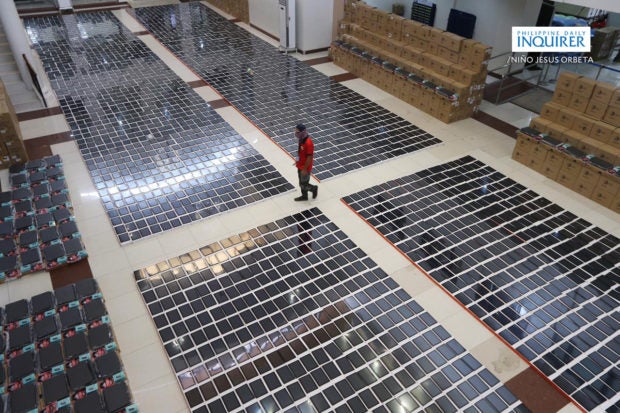 Zamora attributed the possible rise in enrollees to transferees from private schools.

(I am expecting that by the coming school year we will see an increase in enrollment. Of course some who have children in the private schools, especially those who are struggling to pay for tuition, it is natural for them to transfer to public schools.)

Zamora also said that since the city’s public schools are more equipped than some private institutions when it comes to gadgets and internet, more parents would opt to move their children to public schools.

(Because our San Juan public schools are actually more equipped than some private schools. Think about it, we have free table, laptop, internet connection that private schools cannot provide. So we are expecting an increase in enrollee this coming school year.)

The city on Friday launched its Fiber Optic Internet and Learning Management System (LMS) in partnership with service provider Converge ICT Solutions Inc, benefitting over 12,000 San Juan public school students from more than 6,000 households, according to a statement from the city government.

The launch comes after the distribution of tablets and laptops to public school pupils over the previous weeks, with Zamora saying it will resolve the gadget and internet problems suffered by students across the city.

A total of 12,500 tablets, 1,000 laptops and 1,000 pocket WiFis were turned over to the city government by the Department of Information and Communications Technology.

(Because of our program, parents do not have to pay for gadgets and their internet connection.)

The LMS, on the other hand, is an online education platform that will help transition school activities online, according to Zamora.

(The learning management system is an education platform, where assignments, exams, and lessons are placed so they do not have to use paper for modules.)

The mayor said that having free gadgets and internet connection was a good preparation for the coming school year.

(This is a good preparation for the coming school year because this time from start to finish of the school year in SanJuan, students can use their gadgets for internet connection.)

Read Next
Zambales village holds low-key feast of patron saint, bars visitors
EDITORS' PICK
A delightful blessing!
Gov’t plans to open COVID-19 vaccination for 5- to 11-yr-olds by January 2022
Gov’t eyeing COVID-19 vaccine booster for essential workers, indigents by Dec. 10
Villar Group gears up for AllValue Shopping Party on Dec. 3; around P 1-million promos and discounts up for grabs
Omicron variant detected in more countries as scientists race to find answers
Legarda: Ending Violence Against Women, a cause for all
MOST READ
Quiboloy warns of ‘much worse than Omicron virus’ if his ‘persecution’ is not stopped
Suspected Omicron cases mild, says leading S. Africa doctor
Bongbong Marcos’ conviction in tax case not a crime involving moral turpitude — lawyer
Marcoleta defends pol ads on ABS-CBN
Don't miss out on the latest news and information.