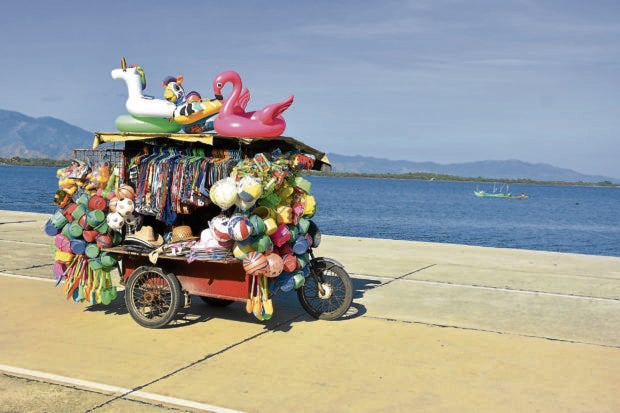 SUMMER STARTER PACK A tricycle converted into a rolling store sells beach essentials like floaters, beach toys, swimwear and hats to people visiting the stretch of Lingayen Beach up to the area where the Limahong Channel (background) meets the Lingayen Gulf in the Pangasinan provincial capital of Lingayen. —WILLIE LOMIBAO

LINGAYEN, Pangasinan, Philippines — The name of Chinese pirate and warlord Limahong has been part of the history of this Pangasinan capital, thanks to a delta of the Agno River.

More than 400 years ago, Limahong (also known as Ah Hong) and his 2,000 men dug the channel to sail their boats toward the South China Sea, according to various historical accounts. They were escaping from the Spaniards who wanted him repatriated after his failed attempt to take Manila from the Spanish colonial government.

Today the delta is known as Limahong Channel.

It is a tribute of sorts to the pirate who terrorized the South China Sea and who settled along a river in this capital town where he married a village princess.

Limahong may not have the best reputation in history, but his story and the waterway named after him have been tapped to boost historical and ecological tourism in the town.

Mayor Leopoldo Bataoil identified the channel as a tourist spot through House Bill No. 6682 which he authored when he represented Pangasinan in Congress.

Lingayen, once a major center of education and commerce in Pangasinan, is rich in history, Bataoil told the Inquirer.

The town hosted the Casa Real, the first capitol built in 1840s by the Spanish colonial government while the Lingayen Beach was where American General Douglas MacArthur landed in 1945 to free Luzon from the Japanese Imperial Army. But it is through the Limahong Channel Tourism Center (LCTC) that Lingayen hopes to land on the tourism map, with a marker installed in the area where the Chinese pirate temporarily stayed in 1574, Bataoil said.

“We hope to jumpstart the tourism industry in the capital town, as well as spur some economic activities through the LCTC,” he said.

The center is envisioned to be a venue where people will converge to appreciate nature and history; and where they can find leisure through diverse activities, such as river cruise, and bike and all-terrain vehicle rides, among many others.

In 2019, local officials led the groundbreaking of the P50-million LCTC that was partly funded by the Department of Tourism. 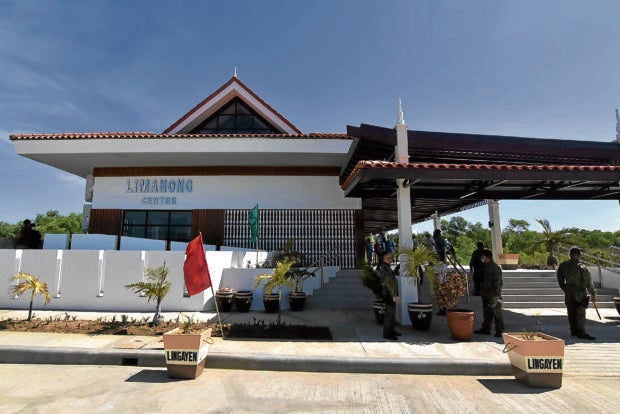 CHINA LINK The Limahong Channel TourismCenter will
showcase historical pieces about Pangasinan’s link to its early
Chinese settlers and their descendants. —RAY B. ZAMBRANO

Bataoil said the center would initially target Chinese tourists who would be “interested in knowing that once upon a time, they had an ancestor who settled here.”

“We can make something out of this history and we can earn something from tourism businesses,” Bataoil said.

The LCTC can be easily accessed through a concrete road along a spot where the channel and the sea meet.

Boaters, anglers and people who just want to enjoy the fresh sea breeze can visit the area. About a kilometer from the bank is a sandbar which the adventurous may explore.

Tourists could also visit the so-called sunset garden where one can view the setting sun.

A 7-hectare second-growth forest is also a welcome respite for the pandemic-weary.

Michelle Liwanag, the town’s tourism officer, said bike trails were carved inside the forest—a 1.6-kilometer trail for experienced bikers and another 1.4 km for beginners.

The LCTC was set to be inaugurated on May 1 but the event was postponed because mass gatherings were still disallowed due to the pandemic.

The provincial government had recognized the decline of the local tourism industry since “resources were directed to address health and security systems.”

About 300 hotels and resorts in Pangasinan were allowed to accept tourists under the “Ridge and Reef” travel corridor with neighboring areas, which began in September last year.

But the reopening of popular destinations has yet to help tourism-related establishments recover from the impact of restricted leisure travel, the provincial tourism office said.