One foot in Canada, one in the US: border parcel business thrives during pandemic | Inquirer News
Close
menu
search

One foot in Canada, one in the US: border parcel business thrives during pandemic 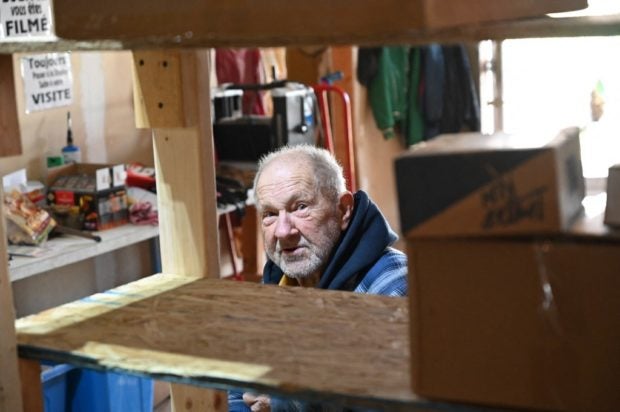 Canadian Paul-Maurice Patenaude who runs a cross-border parcel drop-off and pick-up service out of his centuries-old house poses for a photograph in Dundee, Quebec, on April 23, 2021. The ground floor of his house is filled with parcels dropped off by US couriers at his back door facing New York State, for pick up at his front door on the Quebec side by Canadians who ordered the items, and who are then obliged to drive over to a customs office next door to pay any duties owing. Photo by Eric THOMAS / AFP

DUNDEE, Canada — The Canada-US border has been closed since the start of the pandemic more than a year ago, but not for Paul-Maurice Patenaude who operates a parcel handoff service from his house, which straddles the international boundary.

“I am both in Quebec and in the State of New York, look how beautiful it is!” laughs the 82-year-old pensioner, one foot on either side of a black line marking the border through the ground floor of his 200-year-old stone and wood building.

Dozens of packages of all sizes left in his “drop-off” box have been sorted and stored on shelves to await pickup.

One is on the south side, in New York State, where parcels are delivered by Fedex or UPS; the other on the north side, in Dundee, a tiny Quebec town of 420 residents, where Canadian customers come to collect their goods.

“Placed like this, between two customs offices, I’m pretty sure it’s unique,” says Patenaude, leaning on his walker as he gives an AFP reporter a tour.

Thanks to a 1842 treaty, his house is one of few in Canada and the United States to be split in two, and according to him, the only one being used as a courier package stopover.

The process is simple: packages arrive at the American door, and Patenaude walks them over to the other side of his house for pickup by Canadian customers who mosey over to a Canada Border Services Agency office next door for checks, and to pay any duties owed.

This permits Canadians to avoid a mandatory 14-day quarantine imposed on all non-essential travelers since March 2020, as well as high international shipping rates for some US online purchases.

Business is booming. “Over the past year, I’ve had an additional 1,800 customers, almost three times more than usual,” says the former mayor of Dundee. On average, 50 parcels a day are delivered through his house.

Patenaude lives on the upper floors and comes down to help out five days a week. He’s been living in this house since 1951.

Richard Lachance drove an hour from his home west of Montreal to pick up American football boots ordered online for his son.

“I have a post office box in Plattsburgh (upstate New York) but with Covid we can’t cross borders,” he explains.

By using Patenaude’s “halfway house” for parcels, he estimates that he saved about US$200 (Can$250) in shipping costs to Canada, which can sometimes be more expensive than the product itself.

Patenaude charges between Can$2 and Can$10 per parcel. It varies according to size, weight and sometimes “my mood,” he says with a smile.

But the influx of new customers has actually been overwhelming at times, to the point that he said he “almost stopped everything.”

He says that he hopes the Canada-US border reopens soon to allow him to reclaim his otherwise peaceful small-town life, including going fishing more often with his son.

“If you think I want (the border) to stay closed to increase my clientele, never, ever! That’s the least of my desires,” he insists.

It was his customers’ heartfelt stories, he says, that made him persevere.

“For some, it’s almost a matter of life and death; I have people who are sick, who need prescription drugs, products that they cannot get in Canada,” he says.

“This service gives satisfaction to thousands of people, so I said to myself: maybe we will have to continue doing it a little while longer.”