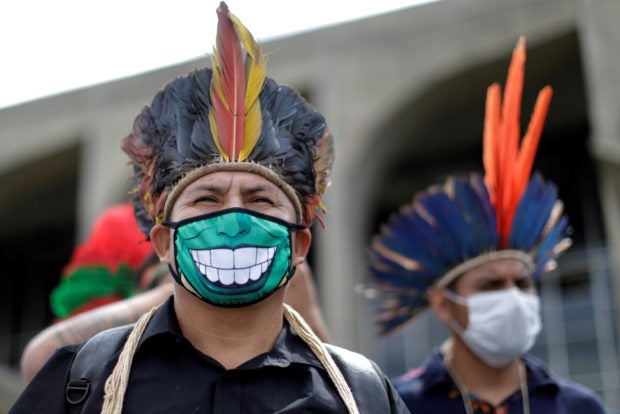 FILE PHOTO: Indigenous people of several ethnic groups protest calling for the demarcation of their lands and the resignation of the Minister of Environment, Ricardo Salles, in Brasilia, Brazil, April 20, 2021. REUTERS/Ueslei Marcelino/File Photo

BRASILIA — Brazil’s indigenous affairs agency Funai has called on a top indigenous leader to explain her criticism of the right-wing government of President Jair Bolsonaro and the impact its handling of the COVID-19 crisis has had on native people.

Federal police have subpoenaed Sonia Guajajara, head of Brazil’s largest indigenous umbrella organization APIB, to testify on her statements at the request of Funai, which was set up in 1967 to defend the interests of indigenous people.

Guajajara said she was summoned to explain her documentary series published on Internet called “Maracá – Indigenous Emergency” which denounces the lethal impact of the COVID-19 pandemic on Brazil’s 850,000 indigenous people and accuses the government of genocide for not protecting them.

“The persecution by this government is unacceptable and absurd! They will not shut us up,” Guajajara said in a Twitter message on Friday.

Another indigenous leader from the state of Rondonia, Almir Suruí, head of the Metareilá Association, was also summoned to testify.

Funai’s role is to coordinate and implement the Brazilian government’s policies to protect the indigenous population, especially their isolated and recently contacted people.

That function has been curtailed under Bolsonaro who has criticized indigenous people for having too much reservation land and advocates commercial mining on their lands. Bolsonaro named a policeman, Marcelo Xavier, to run the agency.

Funai declined to comment on the subpoenas and said it does not comment on matters under police investigation.

APIB rejected the move to silence the indigenous leaders.

“In yet another act of political persecution and authoritarianism, President Bolsonaro’s government is trying to criminalize the indigenous movement and its leaders,” it said in a statement.

APIB said the attacks come from a federal agency that should be defending the rights and promote the autonomy and freedom of expression of indigenous people.