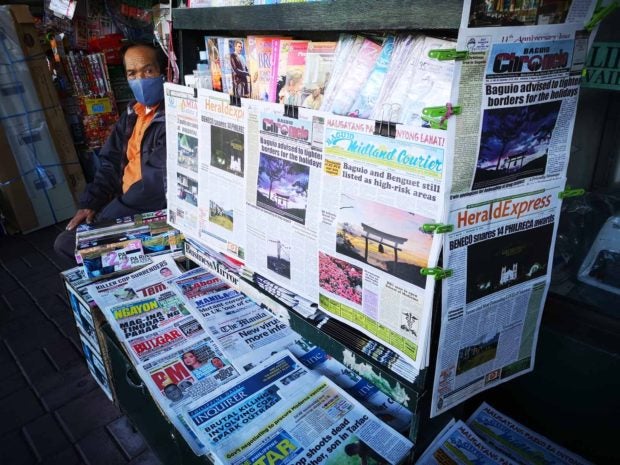 HEALTH CRISIS CASUALTY Despite diminishing revenues and lack of advertisers, several community weeklies in Baguio City still manage to reach newsstands. The daily SunStar Baguio is the latest local newspaper to stop operation as the pandemic battered businesses in the regions. —EV ESPIRITU

BAGUIO CITY—The closure of Baguio’s only local daily, the impending removal of newsstands from downtown streets and shrinking advertising revenues now plague community journalism here in the middle of the public health crisis due to the coronavirus pandemic. On Monday, World Press Freedom Day, SunStar Baguio announced that it was ceasing operations.

It was the first newspaper to be put up in Luzon in the 1990s by Cebu City-based SunStar Cebu when it expanded into a network of provincial newspapers serving key regions of the country. The SunStar franchise outside Cebu operated in partnership with local investors.

SunStar Baguio discontinued its print version late in 2020 but had operated online editions until it stopped production at the start of this month.

The decision displaced 16 employees in the paper’s editorial and marketing departments and its printing press, said Malen Catajan, one of SunStar Baguio’s desk editors. 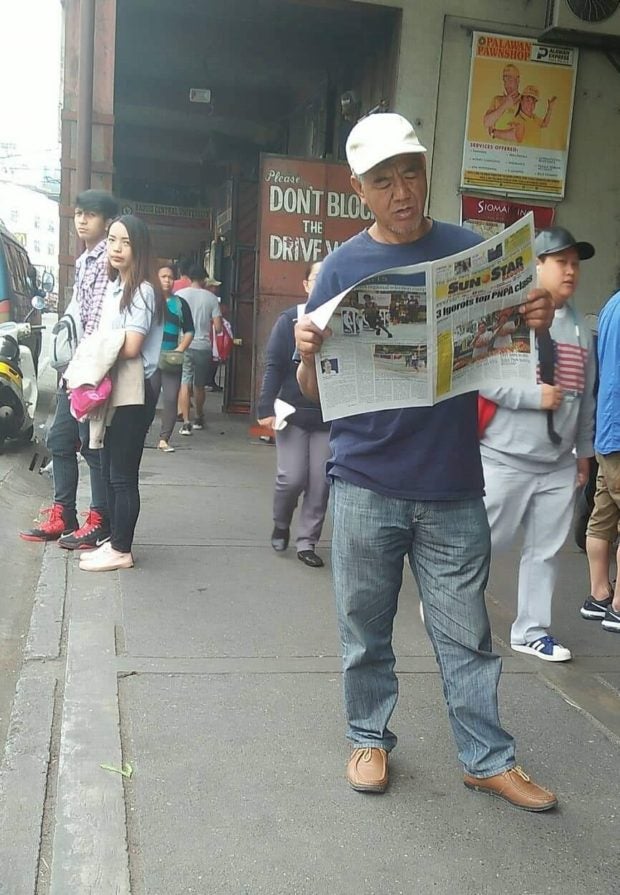 She had been living off grant-financed story assignments after the newspaper stopped printing.

In a message she circulated after the closure was announced, Catajan asked people to allow her fellow employees a short time to grieve, “then we will be back to rock and roll.”

In Cebu City, Julius “JJ” Neri Jr., SunStar Cebu president, said he was sad over the closure of SunStar Baguio.

In an interview on Tuesday, Neri said the recent development was somehow expected as many media outfits struggled to stay afloat amid the pandemic.

“It is no longer economically viable [to continue the operations of SunStar Baguio]. Our business partners deemed it proper to shut down its operations,” he said.

“I hope this (SunStar Baguio) will be the last [to cease operations among the SunStar companies],” he added.

Last year, the management of SunStar Cagayan de Oro also decided to shut down its print operations after the pandemic heavily diminished the paper’s revenue.

“We can’t do anything about it especially because we’re in the midst of a pandemic. We’ve got no other choice,” Neri said.

Going digital, he said, is an option.

SunStar Publishing has 10 remaining newspaper companies spread throughout the country.

The competition among surviving Baguio newspapers amid the pandemic has become more aggressive over other sources of revenue, such as judicial and legal notices, and even obituaries, said Alfred Dizon, publisher of Northern Philippine Times.

“We are trying to increase readership through blogs and websites but we need help with that. I am not a tech guy,” he said in a forum organized by the Cordillera News Agency on Tuesday.

Dizon said the most imminent problem that needed solution was the relocation of newsstands from downtown Baguio sidewalks by July. News distributors were given until June to secure new locations that do not obstruct pedestrian traffic.

For instance, GMA 7 stringer Darius Bajo and a small group of Baguio reporters started training their colleagues about the new technology that they must use, such as tools for efficient video data transmission or video conferencing.

Baguio Correspondents and Broadcasters Club (BCBC), the largest media group in the city, also set up a cooperative and had secured alternative livelihood for displaced media workers, said its president, Aldwin Quitasol.

The number of distressed media workers here is estimated at 80, including employees of SunStar Baguio, Quitasol said in the same briefing.

CNA has been coordinating with experts to begin training Baguio and Cordillera news organizations, which have converted into online publications, to help them monetize their shift to a digital market, said Frank Cimatu, CNA president.

But the media support mechanism must pursue the preservation of the Baguio news industry, which has helped shape local governance for the past 75 years, he said.

Cimatu, also managing editor of the weekly Baguio Chronicle, said Baguio’s community press was not only struggling with the economic downturn but also with a deliberate attempt to discredit traditional journalism.

Participants in the media forum discussed the impact of the shutdown last year of leading broadcast network ABS-CBN as well as a proposal by a government intelligence-sharing body to undertake “tokhang” against local media and government workers suspected of having ties with communist rebels.

Tokhang is a controversial police tactic used in the drug war that allowed law enforcers to visit suspects in their homes and “persuade” them to abandon their criminal activities. The policy was eventually linked to extrajudicial killings.

The proposed tokhang on Cordillera media and government workers has since been withdrawn.

But the more insidious problem of grassroots reporting has been social media attacks to discredit professional journalists, forum participants said.

—WITH REPORTS FROM NESTLE SEMILLA AND ADOR VINCENT MAYOL INQ