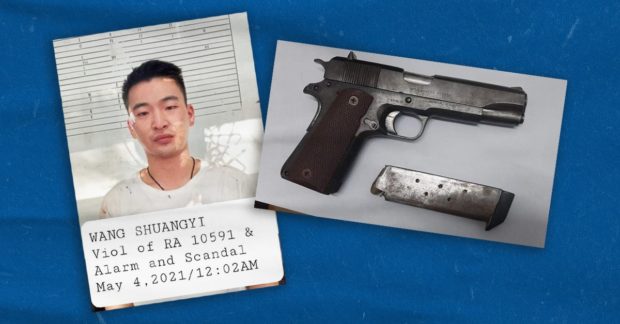 One of the Chinese national arrested in Malate, Manila. Image from MPD

MANILA, Philippines — Three Chinese nationals were arrested for a shooting incident on Tuesday following a brawl at a hotel parking lot in Malate, Manila.

Among the three, only one was identified, while the two others could not speak or understand English.

In a report prepared by the Manila Police District, authorities identified one of the suspects as Wang Shuangyi, 25 years old, a Chinese national residing in Binondo, Manila.

A witness narrated that prior to the incident which took place at 12:04 AM of May 4, Shuangyi was with four other Chinese men at a parking lot in front of Admiral Baysuites Condominium along Roxas Boulevard in Malate, Manila.

Shuangyi and his companions were allegedly engaged in a heated argument among themselves that resulted in a fistfight.

The suspect, who was badly beaten, then boarded a black BMW Sedan and drove towards MH Del Pilar Street.

After a short while, Shaungyi then went back on foot towards the group he had a scuffle with. He then pulled out a pistol from his back and fired shots.

When authorities arrived, Shuangyi attempted to flee, but the police eventually caught up with him and brought him back to the place of occurrence — where he was identified by the witness as the one who fired the handgun.

The police also arrested two other suspects involved in the fistfight, but they could not understand nor speak English, said the arresting officers.

Since the involved suspects are of foreign origin, Police said the case will be referred to the Manila Police District-General Assignment and Investigation Section, “for proper disposition.”