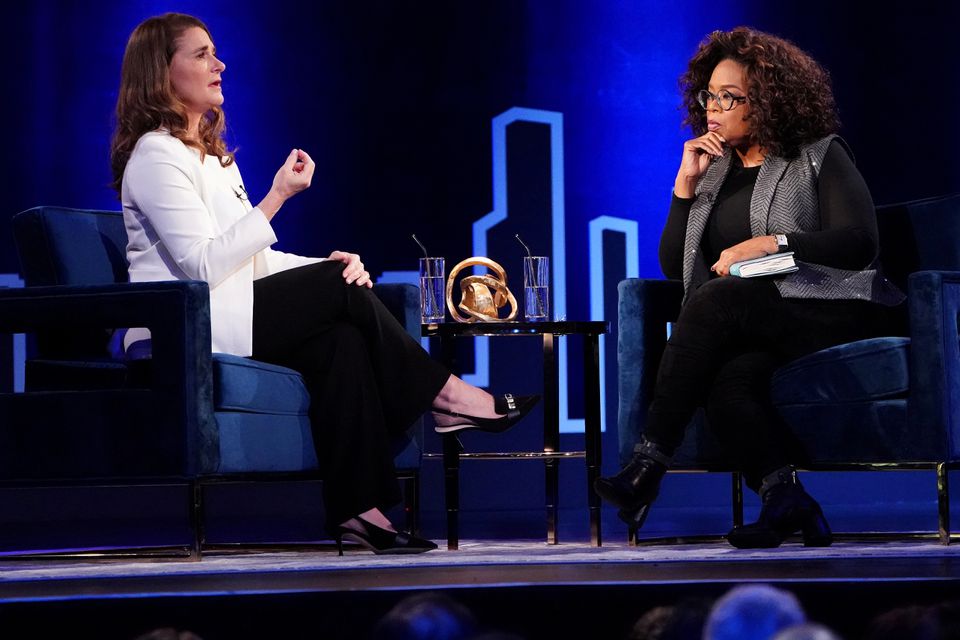 Melinda Gates (L) speaks to Oprah Winfrey on stage during a taping of her TV show in the Manhattan borough of New York City, New York, U.S., February 5, 2019. REUTERS/Carlo Allegri

When Melinda French Gates asked her husband, Microsoft Corp co-founder Bill Gates, to let her co-author the 2013 annual letter about their foundation, the conversation blew up into a fight.

“It got hot,” Melinda wrote in her 2019 book, “The Moment of Lift.” “Bill said the process we had for the Annual Letter had been working well for the foundation for years, and he didn’t see why it should change.”

Ultimately, Bill agreed for her to write a separate piece about contraceptives, while he penned the main letter about the Bill & Melinda Gates Foundation’s work. In the next year’s letter, Melinda wrote about one of three myths that “block progress for the poor,” while Bill handled the other two.

Melinda’s long journey away from Bill’s shadow is set to enter a new phase after the billionaire benefactors announced on Monday that they would divorce after 27 years, saying in a court filing that “this marriage is irretrievably broken.”

The 56-year-old Texas-raised computer scientist, who met Bill Gates, 65, at a company dinner in New York, will continue to run the foundation with him. But she has also positioned herself, in a solo capacity, as an activist for women’s rights.

In 2015, she founded Pivotal Ventures, an investment company focused on women and families, while her book is centered on issues of female empowerment.

“The world is finally waking up to the fact that none of us can move forward when half of us are held back. The data is clear: empowered women transform societies,” she wrote in a note about her book.

Her Facebook page includes shout-outs to caregivers and concerned posts about care for newborns, as well as an Easter post featuring an old photo of her smiling as she holds a little girl, presumably one of her two daughters, next to a costumed Easter bunny.

The extent of Melinda’s impact will likely be determined in part by what happens to Bill Gates’ fortune, estimated by Forbes at around $130.5 billion. In their divorce filing, the spouses said they had agreed on division of assets, but did not disclose details.

MacKenzie Scott’s 2019 divorce from Amazon.com Inc founder Jeff Bezos left her with a 4% stake in Amazon, which she has used to become a leading philanthropist. In December, Scott said she had donated over $4.1 billion in the four previous months to food banks and emergency relief funds amid the COVID-19 pandemic.

Tech journalist Kara Swisher tweeted she was “seeing a lot of funny” memes about MacKenzie Scott and Melinda Gates road-tripping, “but FYI: Melinda has done a ton of investing via her Pivotal Ventures and has been the key player in the Gates Foundation with Bill for long time, so not sure much will change.”