Nuns on trial in Argentina over abuse of deaf children 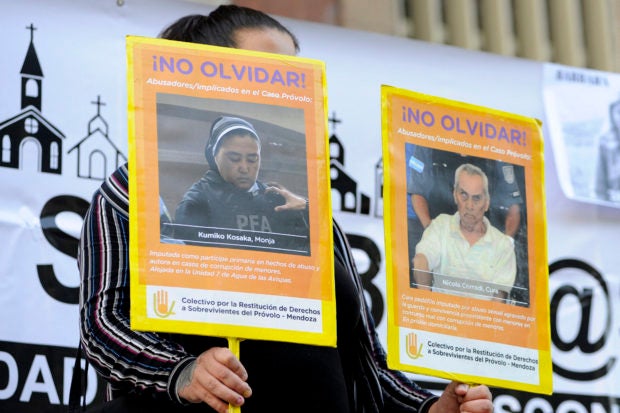 In this file photo taken on November 25, 2019 A woman holds posters of people accused of sexual abuse, corruption of children and mistreatment during a demonstration outside court where the verdict in a sexual abuse case against two priests and a gardener at the Provolo Institute in Mendoza is expected, in this Argentine city, on November 25, 2019. Two nuns and seven other female employees of an Argentine institute for deaf children went on trial on May 3, 2021 in a sexual abuse case that has shocked the country of Pope Francis. Photo by Andres LARROVERE / AFP

BUENOS AIRES — Two nuns and seven other female employees of an Argentine institute for deaf children went on trial Monday in a sexual abuse case that has shocked the home country of Pope Francis.

Two priests in charge of children at the center were jailed for more than 40 years each in November 2019 for sexual abuse, including rape, of some 20 minors.

This is the second trial in the case for crimes committed between 2004 and 2016 at the Provolo Institute in Mendoza, some 1,000 kilometers (620 miles) west of Buenos Aires.

The victims were aged between four and 17 at the time.

Several staff at the school were taken into custody after allegations of abuse first surfaced in 2016, and the institute was shut down.

First up on trial were Argentine priest Horacio Corbacho, sentenced to 45 years in jail, and Italian Nicola Corradi, who got 42 years behind bars.

The institution’s gardener, Armando Gomez, was jailed for 18 years for sexual abuse, and a former altar boy, now in his 50s, was given a sentence of ten years after pleading guilty to the sexual abuse of five children.

The main accused in the dock this time round is Japanese nun Kumiko Kosaka, 46, accused of aggravated sexual abuse and covering up the crimes.

Another nun, Paraguayan Asuncion Martinez, 53, stands accused of “corruption of minors” concealing the crimes, alongside the center’s legal representative, a psychologist, a cook and four directors of the institute.

“Without the nuns who were in charge of the children, the social worker, the directors, without all that structure none of this would have been possible. Corbacho and Corradi were not alone,” said Erica Labeguerie, sister of Claudia, a victim of the center.

Ariel Lizarraga, father of another victim, 29-year-old Daiana, said: “They covered up everything, preventing them (the children) from learning sign language so that it would not come out.”

Amid the coronavirus outbreak, the trial opened in Mendoza without journalists in attendance.

None of the defendants were in court, but participated by video transmission, judicial sources said.

Kosaka is under house arrest, the only one in pre-trial detention.

The trial is expected to last about six months, with about 100 witnesses due to testify.

“The families are expectant,” said Labeguerie. “It is as if a door was opened that enables many memories, an infinite sadness because nothing is going to give us back everything that was stolen from us.”

Founded in 1995, the Provolo Institute offered free education to children of modest origins who had hearing and speech difficulties, with on-site boarding during the school week.

The Catholic Church has been shaken by a string of child sex abuse scandals in recent years; in the United States, Europe, Latin America and Australia.