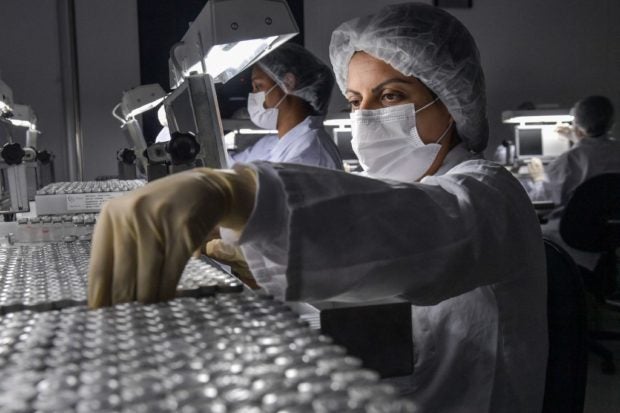 In this file photo taken on January 14, 2021 employees work on the production line of CoronaVac, Sinovac Biotech’s vaccine against the COVID-19 coronavirus at the Butantan biomedical production centre, in Sao Paulo, Brazil. Shortages of COVID-19 vaccines have forced several large Brazilian cities to suspend administering second doses, officials and media reports said on May 3, 2021, the latest breakdown in the hard-hit country’s troubled immunization drive. Photo by NELSON ALMEIDA / AFP

Seven of Brazil’s 26 state capitals have stopped administering the booster shot of Chinese-developed CoronaVac because of a lack of supply, according to news site G1.

And Rio de Janeiro, Brazil’s second city, announced Saturday it was halting second doses of the vaccine for 10 days, before revising its immunization calendar to ensure booster shots would be administered by age group — albeit at a slower rate.

However, those aged under 60, including health workers, could have to wait two to 12 days beyond the recommended 28-day interval between doses under the city’s new immunization schedule.

Other capitals that have suspended second doses include major cities such as Belo Horizonte and Porto Alegre, population 2.5 million and 1.5 million, respectively.

More than half Brazil’s state capitals do not currently have enough vaccines to ensure everyone who has received a first dose will get the second on time, according to newspaper Folha de Sao Paulo.

Brazil, where Covid-19 has claimed more than 400,000 lives — second only to the United States — is struggling to vaccinate its 212 million people.

It has been using two vaccines, both of which require two doses: CoronaVac and the Oxford/AstraZeneca vaccine.

Last week, it received its first million doses of the two-dose Pfizer vaccine, which it began distributing Monday.

Health Minister Marcelo Queiroga said Sunday the second-dose shortages were due to a logistical mistake made under his predecessor, army general Eduardo Pazuello, whom Bolsonaro fired in March.

Under Pazuello, the health ministry decided to release reserves of second doses to be administered as first doses, in a bid to accelerate Brazil’s vaccination campaign.

But the additional doses it was counting on to replace them have not arrived in time.

About 15 percent of Brazil’s population has received a first vaccine dose, and 7.5 percent a second.

Woman wakes up to blood dripping on her from ceiling, discovers neighbor died upstairs