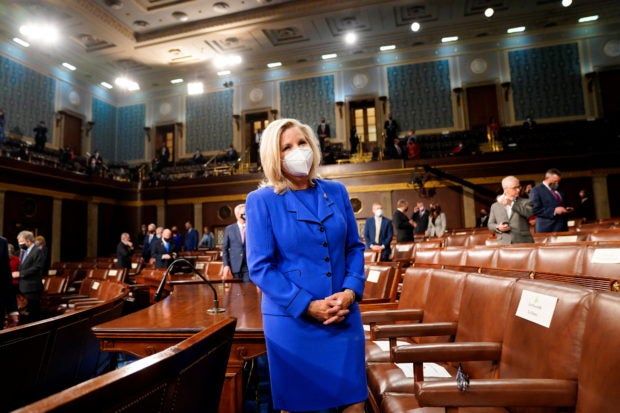 FILE PHOTO: Rep. Liz Cheney (R-WY) waits for the arrival of President Joe Biden before he addresses a joint session of Congress in Washington, U.S., April 28, 2021. Melina Mara/Pool via REUTERS

WASHINGTON — The No. 3 Republican in the U.S. House of Representatives on Monday said former President Donald Trump was “poisoning our democratic system” with his persistent false claims that his November election defeat was the result of fraud.

U.S. Representative Liz Cheney, daughter of former Vice President Dick Cheney and a Trump critic, assailed him in a tweet, risking further raising the ire of the former president’s allies in their Republican Party.

“The 2020 presidential election was not stolen. Anyone who claims it was is spreading THE BIG LIE, turning their back on the rule of law, and poisoning our democratic system,” Cheney tweeted without mentioning Trump by name.

But earlier on Monday, Trump in a statement appeared to be trying to redefine the term “the big lie,” adopted by his critics, in the way he commandeered the phrase “fake news” during his presidency.

“The Fraudulent Presidential Election of 2020 will be, from this day forth, known as THE BIG LIE!” Trump said.

President Joe Biden defeated Trump by more than 7 million votes, and Trump’s claims of fraud at the time were repeatedly rejected by courts and state and federal election authorities.

Opinion polls show large numbers of Republican voters accept Trump’s claims of fraud, which helped spark the deadly Jan. 6 riot by his supporters at the U.S. Capitol, an unsuccessful attempt to stop the certification of Biden’s victory.

Six in 10 Republicans also believe Trump’s false claim the election was stolen and the same proportion of Republicans think he should run again in 2024, according to a Reuters/Ipsos poll in March.

Cheney survived an effort by Trump allies to oust her as House Republican Conference chairwoman this year after joining nine other House Republicans to vote for his impeachment on Jan. 13.

“PREDICTION: she’ll be out of her GOP leadership role by month’s end!” Texas Republican Lance Gooden tweeted over the weekend. Other Republicans have risen to Cheney’s defense, including Senator Susan Collins.

Americans may be hearing much more from Trump this week, if Facebook on Wednesday decides to lift a suspension of his account put in place after the Capitol riot.