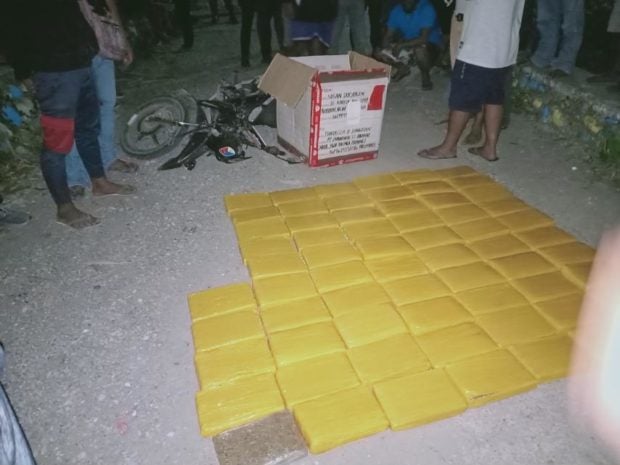 Authorities seized this marijuana in bricks and tabular containers worth P5.88 million in Tabuk City recently. They also uprooted and destroyed P4 million worth of marijuana plants in Tinglaya town in Kalinga province. Photo courtesy of PNP-Kalinga Provincial Police Office

TUGUEGARAO CITY –– Two suspected drug traders in Kalinga province were arrested, while some P9.8 million worth of marijuana leaves and plants were seized in separate operations, authorities said.

In a belated report Monday, May 3, the police said Carlos Banosan, 27, and Mylene Sola-og, 25, both of Barangay San Pedro in Rizal town, were caught with 49 kilos of marijuana, mostly in bricks, during an operation in Barangay Bulanao, Tabuk City last week.

The marijuana was worth P5.88 million.

The Cordillera and Kalinga police teamed up with the Quezon City Police District-Kamuning Police and the Drug Enforcement Group Southern Operations to arrest the two.

The police said Banosan and Sola-og were supposed to deliver the contraband in Quezon City.

In another operation, anti-narcotics agents uprooted and burned 20,000 fully-grown marijuana plants in a two-hectare plantation at Barangay Loccong in Tinglayan town.

The police said the destroyed marijuana plants were worth about P4 million. No cultivators were arrested at the time.