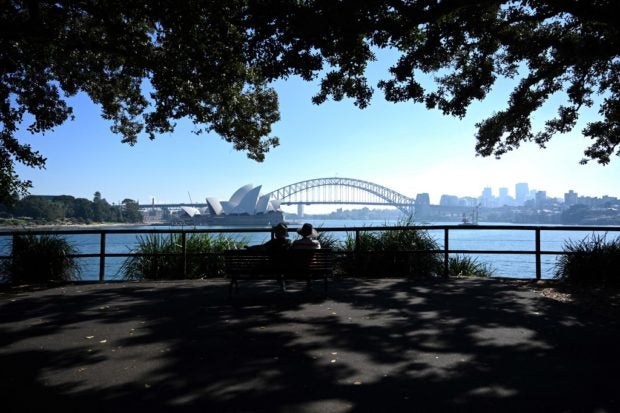 A couple enjoy the view of Sydney Harbor from Mrs Macquarie’s Chair on May 3, 2021, as Australia’s largest city is enveloped in a thick bank of hazardous bushfire smoke forcing authorities to scale back controlled forest burning nearby. Photo by Saeed KHAN / AFP

SYDNEY — Sydney was enveloped in a thick bank of hazardous bushfire smoke Monday, forcing authorities in Australia’s largest city to scale back controlled forest burning nearby.

Ferries were cancelled and the city’s five million residents were told to stay indoors if necessary, as air pollution levels spiked.

Levels of hazardous PM 2.5 pollution — particles that can seep deep into the lungs and cause respiratory illnesses — were among the worst in the world at more than 190 on the air quality index.

But they were forced to scale back plans for further burns Monday as pollution reached hazardous levels and some union groups told workers to drop tools if the smoke was too much.

“Light winds and an overnight inversion has resulted in smoke settling in low-lying residential areas,” the fire service said.

The smoke was forecast to clear as the day progresses.

Fires ravaged much of eastern Australia in 2019-2020, killing 33 people, destroying more than 3,000 homes and enveloping Sydney and other cities in a soup of smoke and ash for months on end.

Climate change is believed to be making fire seasons longer and more dangerous, as well as limiting the timeframe when controlled burns can be carried out safely.