Children, teens account for a third of dead in Israel stampede 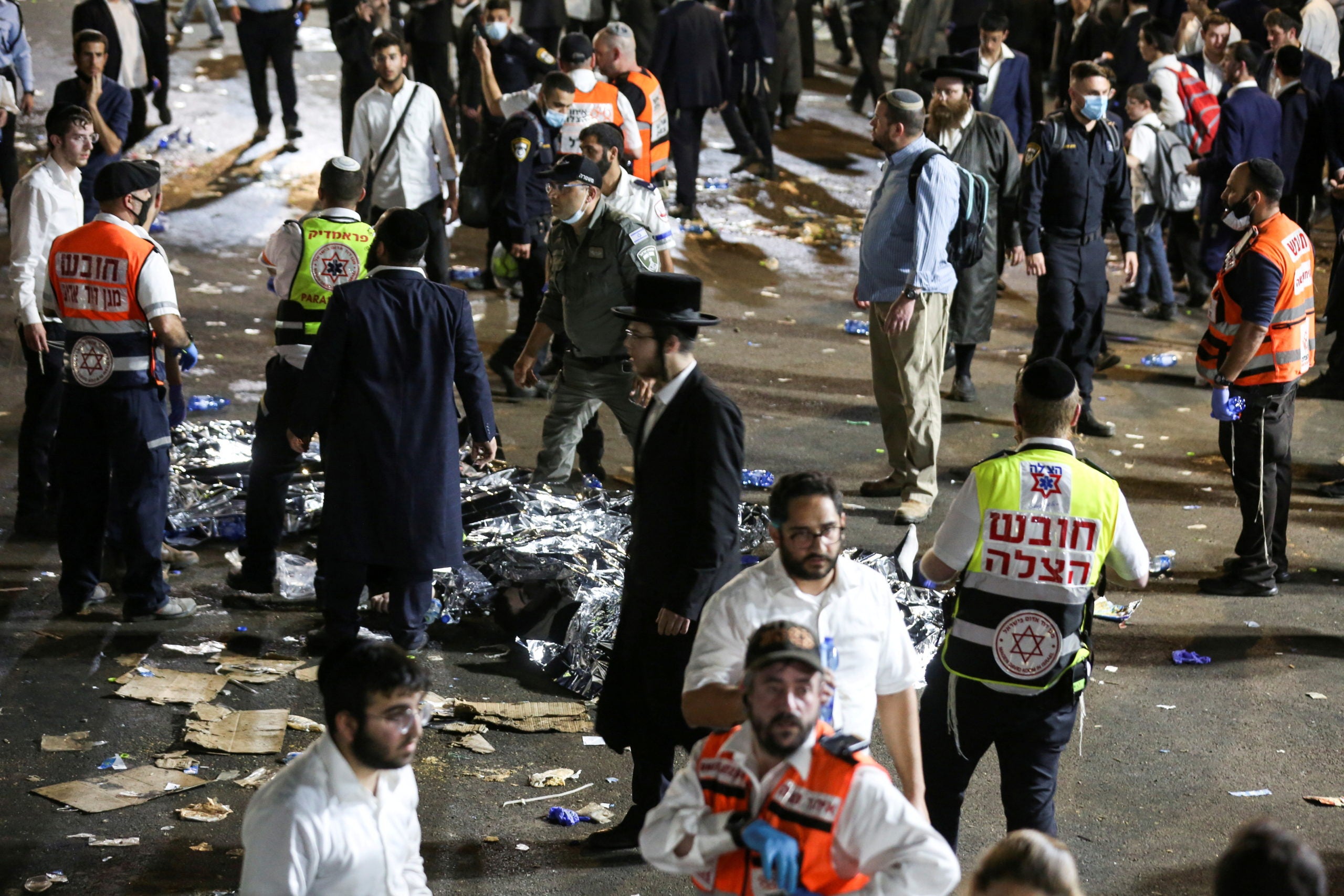 Medics and rescue workers attend to the Lag B’Omer event in Mount Meron, northern Israel, where fatalities were reported among the thousands of ultra-Orthodox Jews gathered at the tomb of a 2nd-century sage for annual commemorations that include all-night prayer and dance, at Mount Meron, Israel April 30, 2021. REUTERS

JERUSALEM — Thirteen-year-old “Azi”, a “sweet” boy who loved learning, was one of at least 16 children and teens among the 45 killed in a stampede at a Jewish pilgrimage in Israel.

The tragedy on Friday on Mount Meron in northern Israel has been called one of the worst peacetime disasters since the Jewish state was founded in 1948.

It impacted scores of young people drawn to what has been described as a spiritual festival for mainly observant Jews.

Azi, whose full name was Elazar Yitzchak Koltai, was buried Saturday night in Jerusalem, according to the mother of a boy in his eighth grade class who requested anonymity while discussing the death.

“It was very sad… There was a lot of crying,” she said of the funeral in Jerusalem’s Har Hof neighbourhood, where Azi’s small body was wrapped in a prayer shawl in the school’s lobby.

Azi “was a sweet, happy kind of kid”, she said. “He loved to learn Torah,” Judaism’s holy book.

The disaster was set in motion Thursday when tens of thousands of pilgrims thronged the site where the Jewish mystic Rabbi Shimon Bar Yochai is believed to be buried.

The event is held annually on Lag BaOmer, a holiday commemorating the day he is said to have died.

It was the largest gathering in Israel since the coronavirus pandemic began, and attendance far exceeded the recommended health ministry guidelines of 10,000 people for outdoor gatherings.

Witnesses said just after midnight Friday pilgrims were crowding into a narrow passageway leading away from the site when people slipped, causing a fatal stampede.

Israel’s Abu Kabir National Center of Forensic Medicine said Sunday it had identified all 45 people killed in the crush.

Rabbi Tuvia Rosen of the Nachlei Daas school outside Jerusalem told AFP that at the event called “Hilula” — from the Hebrew word for “to praise” — pilgrims celebrate with song and dance, and donors often provide free food for hundreds of thousands of travelers.

Although the pilgrimage goes back hundreds of years, Rosen said it has grown dramatically as Israel’s population of religious Jews has expanded, leading to rising number of young people attending.

A visibly exhausted Avigdor Hayut, 36, who brought two sons to Meron, recounted to Israeli media the death of his 13-year-old son, Yedidya.

The resident of the mainly ultra-Orthodox city of Bnei Brak described “a river” of people who piled up behind his family as they exited an area where a ceremonial bonfire was lit.

The father and his sons fell. Hayut’s 10-year-old son lay beside him and said during the stampede, “Dad, I’m dying,” Hayut recalled but in “a visible miracle,” recovered.

“He was a saint, a holy boy. And if he would have wanted me to say anything, it’s one thing: We all have common ground. We are Jews.”

Yedidya was buried Saturday, according to Israel’s Kan television.

All the victims at the gender-separated site were male, although women who attended the festival said they also fought through jammed crowds, and some lost contact with their children among the masses.

Read Next
PH can be cordial with other nations but not at the expense of sovereignty – Lorenzana
EDITORS' PICK
Palace: Duterte unfazed by ICC probe on drug war killings
Palace says ICC prosecutor report is ‘fantastical,’ based on ‘hearsay’
Smart brings KCON:TACT especially 4U to subscribers from June 19 to 27
Defending himself before ICC ‘logical thing to do’ for Duterte, says Drilon
Synology NAS: A photo storage and multimedia server for your home
Kai Sotto, Angelo Kouame lead Gilas final 12 vs South Korea
MOST READ
Opposition ‘must go beyond anti-Duterte platform’ in 2022 polls – Drilon
Duterte to meet with Sotto, Velasco to discuss fate of BARMM polls
Palace says ICC prosecutor report is ‘fantastical,’ based on ‘hearsay’
Sotto sees Sara, Pacquiao as ‘formidable competitors’ for president
Don't miss out on the latest news and information.