Venezuela triples wages but still not enough to buy food 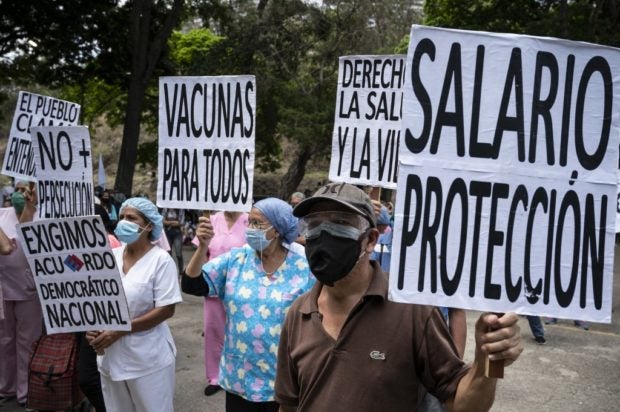 Health workers carry signs while participating in a protest demanding better wages, mass vaccination against the novel coronavirus, COVID-19, and biosafety material to protect themselves, outside the Doctor Jose Gregorio Hernandez Hospital in Catia neighborhood in Caracas as part of the celebration of the International Workers’ Day on May 1, 2021. Photo by Yuri CORTEZ / AFP

CARACAS — Venezuela nearly tripled its minimum wage Saturday but inflation is so outrageous that that amount of money will not even buy a kilo of meat.

Labor Minister Eduardo Pinate announced the raise to government supporters at a May Day rally in Caracas.

The new monthly minimum wage is seven million bolivares, which is equivalent to $2.50. A kilo (2.2 pounds) of meat in Venezuela costs about $3.75.

The once-wealthy oil producer is enduring its fourth year of hyperinflation and its eighth year of recession.

Venezuela is now in the worst economic crisis of its modern history. Inflation is so bad that the everyday economy now works mainly in dollars.

The leftist government of President Nicolas Maduro is under international sanctions championed by the United States, which is pushing for his ouster and does not recognize him as the country’s legitimate president.

Maduro has stopped announcing wage increases with much fanfare as was done in the days of his mentor and predecessor, the late socialist firebrand Hugo Chavez.

In fact, this latest raise was not even published in the official government gazette.