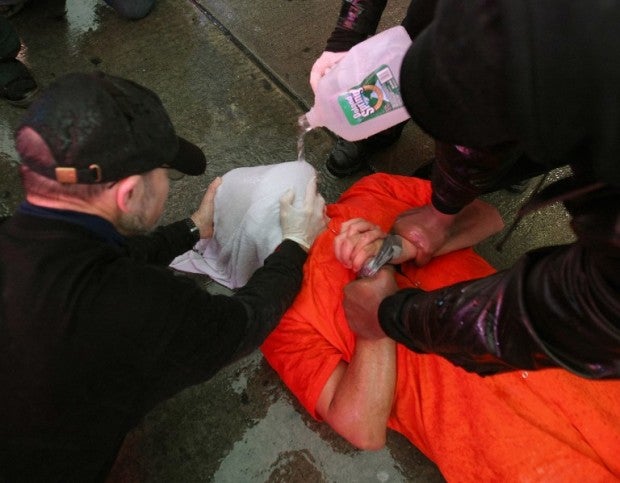 FILE PHOTO: Demonstrators from the group “World Can’t Wait” hold mock waterboarding torture of a prisoner in Times Square on January 11, 2008, to mark the sixth year anniversary of when the United States opened the camps at Guantanamo. Waterboarding is a form of torture that consists of immobilizing a person on his or her back, with the head inclined downward, and pouring water over the face and into the breathing passages. AFP PHOTO / Timothy A. CLARY / AFP PHOTO / TIMOTHY A. CLARY

Washington, United States — A Guantanamo Bay inmate alleges he was tortured by his American captors after the September 11 attacks and will file a complaint with the United Nations (UN) on Friday over his unending 19-year detention, his lawyer said.

Abu Zubaydah’s lawyer Helen Duffy said the complaint will be filed with the United Nations Working Group on Arbitrary Detention against the United States and six other countries, asking for intervention in his case.

The 50-year-old Saudi-born Palestinian, whose real name is Zayn al-Abidin Muhammad Husayn, was detained in Pakistan in March 2002 on suspicions he was a senior member of Al-Qaeda who helped plan the 9/11 attacks.

According to his lawyer, he was handed over to the CIA, which moved him through a series of secret units in several countries where he was brutally interrogated.

He was the first of a series of detainees to go through waterboarding and other now-banned techniques as US intelligence sought to force information from him about others in the jihadist group.

In 2003, he was transferred to Guantanamo, where he has stayed ever since. US officials have since admitted he was never a member of Al-Qaeda or an important figure among Islamic extremists.

Moreover, one of his interrogators, an FBI agent, has said that he cooperated easily before he was tortured so that he had nothing to add once he was subjected to the CIA’s extreme interrogation methods, which included 83 instances of waterboarding.

Like most others among the last 40 detainees in Guantanamo, Abu Zubaydah has never been charged and faces indefinite imprisonment.

“His detention has no lawful basis in international law (and) offends all principles of due process,” Duffy said in a statement.

The petition will ask the UN agency to find that the United States is obliged to release him.

It also demands that six other countries involved in his disappearance and rendition — Britain, Thailand, Afghanistan, Lithuania, Poland, and Morocco — use their powers to secure his release and relocation.

“After 19 years of arbitrary detention, the only appropriate legal remedy for Abu Zubaydah is release and rehabilitation,” Duffy said.

She added that how the administration of US President Joe Biden responds to the complaint “will be a test of its newly stated commitment to international rule of law and human rights.”

In a separate legal case, the US Supreme Court on Monday said it would review Abu Zubaydah’s petition to subpoena two CIA consultants who oversaw post-9/11 torture operations.

That petition is related to an investigation in Poland into torture conducted by the CIA at a black site in that country, including on Abu Zubaydah.