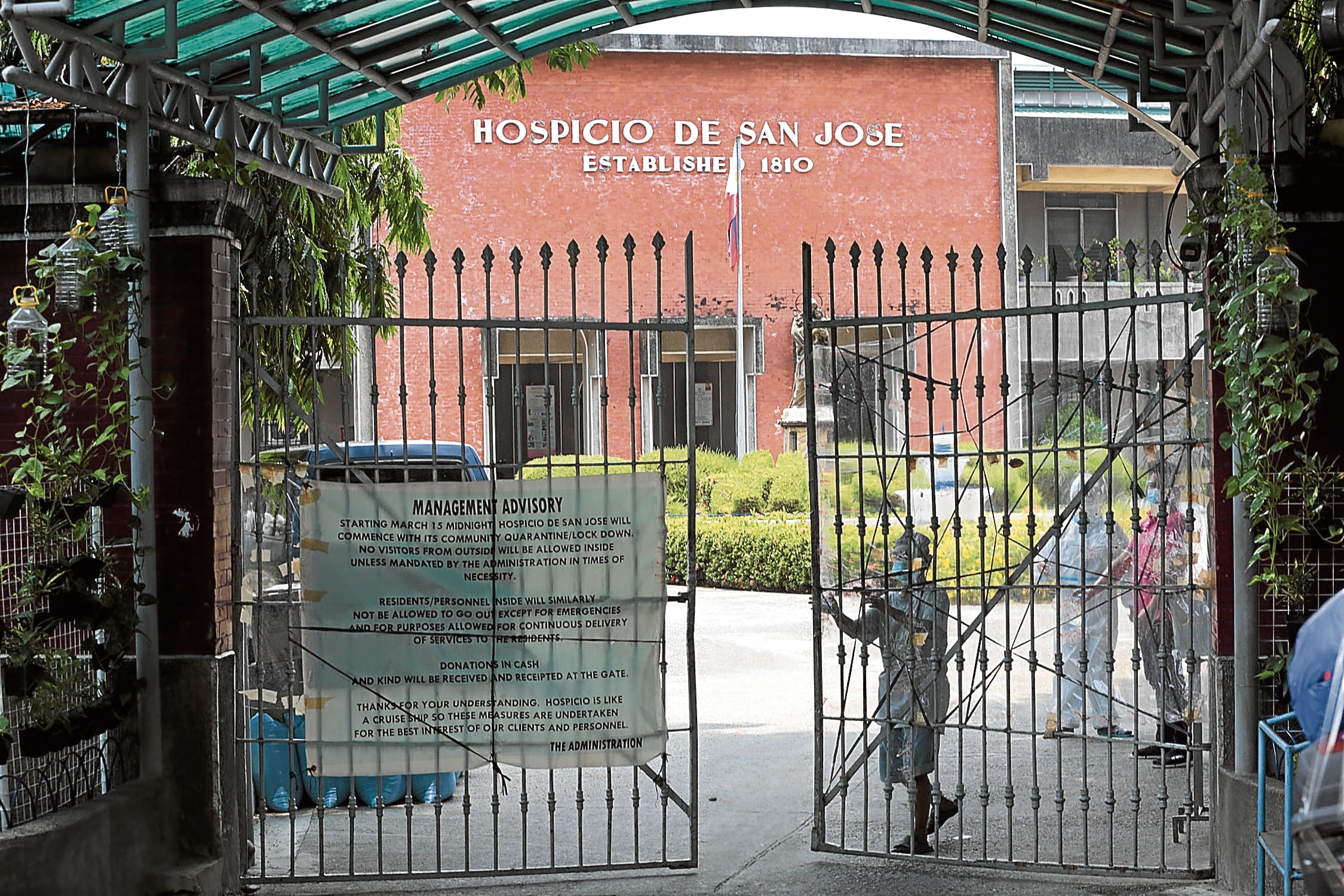 ISLAND SHELTER  – A staff member closes the gate of the Hospicio de San Jose on Isla de Convalecencia in Manila on Thursday. The shelter is on lockdown due to COVID-19 infections and in need of donations for the orphans and elderly that it cares for. —GRIG C. MONTEGRANDE

Help began coming on Thursday for a historic religious-run shelter that is struggling to keep to its mission of caring for orphans, the homeless and the elderly amid the COVID-19 pandemic.

A call for help had earlier been sounded by a concerned person assisting the nuns of the Daughters of Charity, which runs the Hospicio de San Jose on the Isla de Convalecencia, a narrow island on the Pasig River in Quiapo, Manila.

The Hospicio, founded during the Spanish era and one of the oldest social welfare institutions in the country, is now on lockdown to contain the COVID-19 virus that has infected a number of its elderly residents and personnel.

A plea for milk and other food items as well as infant and adult diapers has gone viral on social media, with Catholic station Radio Veritas and a lay apostolate arm of the Catholic Bishops’ Conference of the Philippines (CBCP) posting the same call on their Facebook pages.

A female member of the Hospicio staff, who declined to be named for lack of authority to speak to a reporter, said on Thursday that 23 people in the compound had been infected. She said an elderly resident died recently, but not of COVID-19.

The Manila city government said it was checking its records to find the cause of the infections. Dr. Arnold Pangan, the city health officer, said the Hospicio personnel and adult residents were next in the vaccination queue.

“A lot of donations started coming in this morning,” the staff member told the Inquirer by phone. “We’re OK so far; we have nurses and [medical] staff here. [But] we need milk and vitamin C.”

In emergency medical cases, residents of Hospicio are taken in an ambulance to its partner, San Juan de Dios Hospital in Pasay City, she said.

An Inquirer photographer on Thursday saw a Philippine Red Cross vehicle entering the compound bearing rice, vegetables and biscuits. The vehicle was welcomed by a male staff member in full protective gear.

A donor who had deposited an amount to the Hospicio account in Metrobank (account number 175-3-17550678-1) said the nuns had “some supplies for the orphans and elderly that may last for a week.”

The donor expressed hope that help in cash or in kind would arrive by the time the week ends.The “main problem,” according to the donor, is “the indigent population” that the Hospicio has been helping feed and support.

“Its food stores for the homeless were already low prior to this lockdown,” the donor said.

In posting the call early on Thursday to help the Hospicio, the CBCP’s Sangguniang Laiko ng Pilipinas said 14 staff members and four of the 19 elderly residents had tested positive for COVID-19.There are about 450 people in the compound, it said.

A part of its online message read: “They are not allowed to leave Isla de Convalecencia. They are running out of food because nobody is donating to them and the sisters are worried about the children and the elders.”

Established in 1810, the Hospicio de San Jose cares for orphans, persons with disability, and elderly people abandoned in the streets of Manila.

On its front gate, accessible via Ayala Bridge, is a tarpaulin announcing that the Hospicio would be under quarantine starting March 15.

Entry and exit have since been restricted except for emergency cases or delivery of essentials.“Hospicio is like a cruise ship, so these measures are undertaken for the best interest of our clients and personnel,” the message on the tarp reads.

The shelter was founded in 1782 and first set up in Pandacan, Manila. It was relocated to the walled city of Intramuros and finally built in 1810 on its present site at Isla de Convalecencia.

In its early years, the institution served as a hospital for convalescing Spanish soldiers and smallpox patients. It also served as an asylum for the mentally ill.In 1865, the Daughters of Charity took over its management. In 1935, it began admitting babies who were surrendered discreetly by parents who could no longer care for them.

As of October 2020, the Hospicio had 142 children and youth under its care. —With a report from Inquirer Research