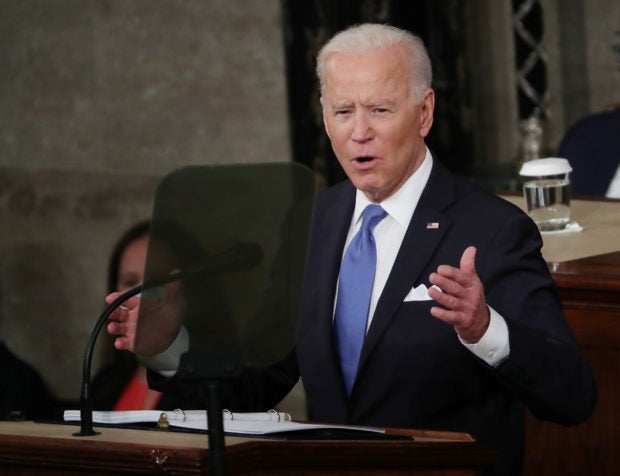 U.S. President Joe Biden delivers his first address to a joint session of Congress in the House chamber of the U.S. Capitol in Washington, U.S., April 28, 2021. Michael Reynolds/Pool via REUTERS

WASHINGTON — President Joe Biden argued in his first speech to Congress on Wednesday that he had restored Americans’ faith in democracy nearly 100 days after he succeeded Donald Trump in office, and was set to unveil a $1.8 trillion spending and tax-credit plan.

Biden appeared in the chamber of the U.S. House of Representatives at an event scaled back this year because of the pandemic, with a small, specially selected group of Democratic and Republican lawmakers arrayed before him, and the first woman to serve as U.S. vice president, Kamala Harris, behind him.

Seizing on the coronavirus pandemic as an opportunity to advance his priorities at a time of political polarization, Biden told the joint session and millions of people watching on television that “America is ready for a takeoff.”

“Now, after just 100 days, I can report to the nation: America is on the move again, turning peril into possibility, crisis into opportunity, setback into strength,” Biden said.

He argued that the new spending and tax-credit package, which together with an earlier infrastructure and jobs plan, totals around $4 trillion, rivaling the annual federal budget – is a once-in-a-generation investment vital to America’s future.

“Tonight, I come to talk about crisis — and opportunity,” he said. “About rebuilding our nation — and revitalizing our democracy. And winning the future for America.”