Around 67% of beneficiaries in ‘NCR Plus’ have each received P1,000 aid – Año | Inquirer News
Close
menu
search 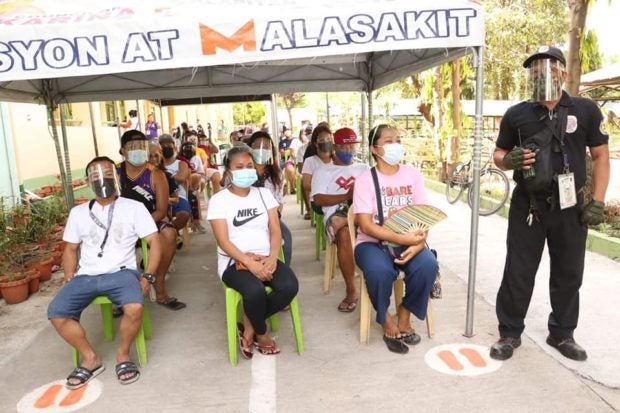 Payout for beneficiaries of cash aid in Caloocan City. (Photo from the Facebook page of Caloocan Mayor Oscar Malapitan.)

According to Año, 67 percent is equivalent to 15.49 million of the beneficiaries in Metro Manila, Bulacan, Cavite, Laguna, and Rizal — the areas collectively known as the National Capital Region Plus that were put under enhanced community quarantine due to a surge in COVID-19 cases.

The total amount disbursed to local government units was P15. 53 billion, according to Año.

“So we disbursed a high amount,” Año said.

The other three provinces’ disbursement date is listed below:

The government was mandated to provide a P1,000 social aid for people whose incomes were affected by the strict lockdown imposed to check the further spread of  COVID-19.

However, several groups complained that the P1,000 aid per qualified citizen — which has a cap of P4,000 per family — would not even go a long way.

Prior to Año’s report, Duterte said that he would find ways to alleviate the suffering of the people. He also apologized for extending the modified ECQ (MECQ) for two more weeks.

“I’ll see what I can do about the suffering of the people — how I can mitigate their suffering,” Duterte said in Filipino.