82% of Muslim adults pray the Salah multiple times a day 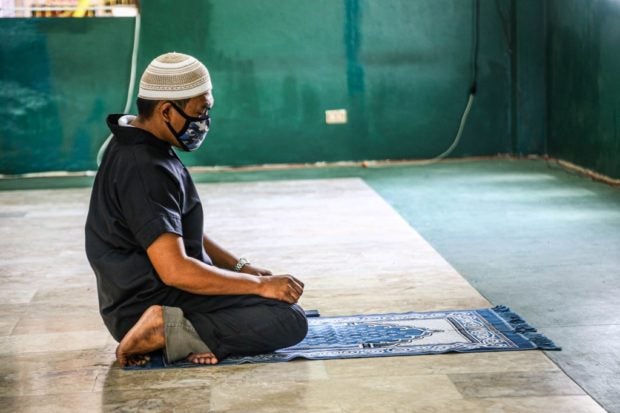 A Imam prays at an empty mosque in Cotabato City. (Photo by Ferdinandh CABRERA / AFP)

MANILA, Philippines — A Social Weather Stations (SWS) survey found out that at least 82 percent of Filipino Muslim adults pray the Salah multiple times a day under the customs set in Islam.

SWS conducted a survey last November 21 to 25, 2020, and around five percent of the 1,500 respondents were Muslims.  However, they found out that only 53 percent of Muslims adhere to praying the Salah five times a day.

Salah are prayers performed by Muslims, facing the Kaaba in Mecca, Saudi Arabia.  The daily obligatory prayers, which are second in the five pillars of Islam, are done at prescribed times in a day: Fajr is the prayer at dawn, Zuhr prayer is done by noon, Asr by late in the afternoon, Maghrib by dusk, and Isha after sunset.

Aside from the 53 percent who pray the Salah five times, 29 percent said they do it a few times in a day, 16 percent said sometimes, and two percent said that the last time they did it was over a year ago.

Most Muslims who pray the Salah more than once a day consider themselves very religious and moderately religious, SWS’ survey further showed.

In terms of other religious denominations, 28 percent said that they pray several times a day, 39 percent said once a day, 17 percent every week, nine percent said every month, and three percent occasionally.

“The November 2020 survey also found 38% of Filipino adults rating themselves as very religious, 50% moderately religious, 10% slightly religious, and 2% not religious at all,” SWS said.

The Holy Month of Ramadan started last April 13, after local Islamic scholars declared the presence of the crescent moon that signifies the start of the holy month.  However, due to the COVID-19 pandemic, mosques have been forced to limit the number of people coming in and out.

Read Next
MECQ in NCR Plus extended until May 14
EDITORS' PICK
Palace doesn’t see tension in WPS, only Duterte haters incite it
Re-imagining EdTech and the classroom in a post-pandemic era
A Spanish Celebracion with Crimson Mactan’s ‘Enye at Home’
CopperMask Philippines shows support for Miss Universe Philippines 2020 Rabiya Mateo
Retired military, police execs call for unity vs China aggression
As vaccine injection rate rises in PH, questions linger on how long it would take to reach herd immunity
MOST READ
Mexico wins Miss Universe title but Myanmar steals show
‘Check your facts:’ Trillanes disputes Enrile claims on 2012 back-channel talks with China
Pangilinan on China’s threat if PH digs oil in WPS: Why should we be scared?
Retired military, police execs call for unity vs China aggression
Don't miss out on the latest news and information.