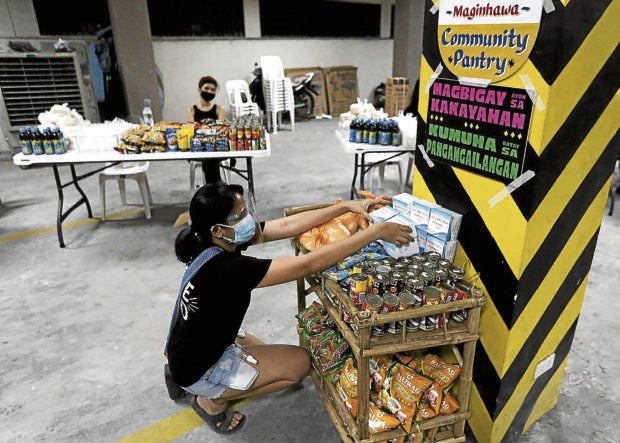 EVOLVING Maginhawa Community Pantry organizer Ana Patricia Non arranges the food items donated to the Quezon City pantry in its new location, in this April 23 picture. The pantry on Tuesday became a drop-off point for donations that will then be distributed to other community pantries around the area. —RICHARD A. REYES

MANILA, Philippines — What started as a bamboo cart where locals can leave essential goods or take pantry items that they need has become a drop-off point for donations.

On its Facebook page, the Maginhawa Community Pantry on Tuesday said that it was now accepting donations at the barangay hall at No. 108 Maginhawa Street, Teachers Village East in Quezon City, for a “more organized and efficient distribution” to other pantries around the area.

The decentralized pantry system will also “help the elderly, pregnant women and persons with disability” get what they need from food aid stations that are more accessible to them, the post added.

Donations are accepted every day, from 10 a.m. to 6 p.m., according to organizers of the pantry that was launched two weeks ago by a Quezon City resident and has since inspired hundreds of similar community projects across the country.

Interior Secretary Eduardo Año said his department would be issuing guidelines to all local governments on “how to handle community pantries” to ensure minimum health standards for COVID-19 prevention are strictly observed.

The advisory and memorandum may include a provision closing down a community pantry if health protocols are disregarded, he said.

“If [minimum health standards] are not implemented or are violated, that’s ground for stopping a community pantry [setup]. Because this could cause a surge or outbreak [of COVID-19],” Año said in an interview on Tuesday on Teleradyo.

The guidelines may also include a ban on signs containing names of politicians.

“There might be politicians who may want to ride on the [pantries’] popularity which would defeat [their] purpose,” Año said.

“The operation of community pantries should be orderly and peaceful and we do not need anyone taking credit when what’s important is we are able to help our needy countrymen,” he added.

At the House of Representatives, Deputy Speaker Rufus Rodriguez filed a resolution asking the Commission on Human Rights and the National Bureau of Investigation to probe the Red-tagging of community pantry organizers.

Under House Resolution No. 1725, Rodriguez said there was a need “to look into Red-tagging activities and put a stop to [them] if [they] result in good ideas like community pantries being forced to close down.”

Ana Patricia Non, now widely praised for her inspiring project on Maginhawa Street in Quezon City, was forced to stop its services for a day last week because of security concerns, after being linked to the communist insurgency by Lt. Gen. Antonio Parlade Jr. and Lorraine Badoy, the spokespersons for the National Task Force to End Local Communist Armed Conflict (NTF-Elcac).

Several lawmakers have assailed Parlade and Badoy for putting the lives of community pantry organizers and volunteers at risk with their Red-tagging remarks, prompting National Security Adviser and NTF-Elcac Chair Hermogenes Esperon Jr. to issue a gag order on the two officials.

Some senators also threatened to defund the NTF-Elcac and realign its P19-billion budget for other government services following Parlade and Badoy’s remarks.

“The [local governments] really have a big role to play because first they can determine the best venues for distribution so those who need the goods would receive them,” he said.

Año added that local governments can determine which sitios, barangays or sites have the most beneficiaries and can also provide more supplies to the community pantries from local producers to help the economy.

“[They] can maintain security [and] peace and order when beneficiaries come in droves. I don’t think the organizer can do crowd control so we need Task Force Disiplina brigades,” he said.

The “idea of private individuals and private organizations [starting community pantries] is really good, but they need to team up with the government, the local government,” Año added.

A community pantry in Cagayan de Oro, his home district, closed down “after being Red-tagged and systematically harassed with leaflets being circulated and posted everywhere, resulting in the owner fearing for his life,” the lawmaker said.

A Muslim restaurant owner in the same city also complained that several people who introduced themselves as policemen went to her place and asked for some personal information after she put up a community pantry outside her restaurant, Rodriguez added.

The Makabayan bloc, composed of six lawmakers from Bayan Muna, Gabriela, ACT Teachers and Kabataan, earlier filed a resolution urging the House committee on human rights to investigate the harassment and profiling of community pantry organizers and volunteers. INQ]

Read Next
Tugade reports improved traffic flow on Edsa
EDITORS' PICK
Palace: Duterte unfazed by ICC probe on drug war killings
Palace says ICC prosecutor report is ‘fantastical,’ based on ‘hearsay’
Smart brings KCON:TACT especially 4U to subscribers from June 19 to 27
Defending himself before ICC ‘logical thing to do’ for Duterte, says Drilon
Synology NAS: A photo storage and multimedia server for your home
Kai Sotto, Angelo Kouame lead Gilas final 12 vs South Korea
MOST READ
Opposition ‘must go beyond anti-Duterte platform’ in 2022 polls – Drilon
Sotto sees Sara, Pacquiao as ‘formidable competitors’ for president
Duterte to meet with Sotto, Velasco to discuss fate of BARMM polls
Palace says ICC prosecutor report is ‘fantastical,’ based on ‘hearsay’
Don't miss out on the latest news and information.

Face-off of some senators for presidency ‘possible’ — Sotto