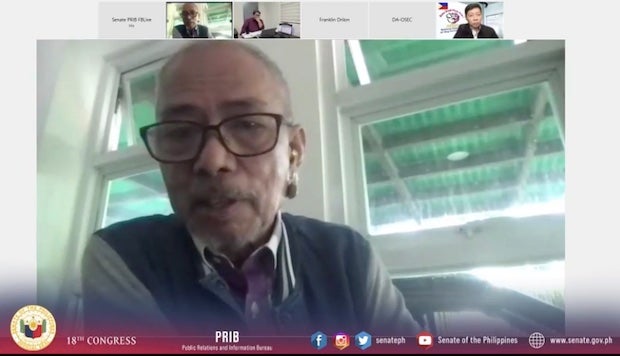 Ramon Cuyco, legal adviser of the Compliance and Regulatory Enforcement for Security and Trade Office (CREST-O) of the Department of Agriculture, participated during the Senate hearing via teleconferencing. (Photo from a video posted on Senate Facebook page)

MANILA, Philippines — The “illegal” issuance of pork importation permits by the Bureau of Animal Industry (BAI) allowed the entry of the African swine fever (ASF) in the country, according to Ramon Cuyco, legal adviser of the Compliance and Regulatory Enforcement for Security and Trade Office (CREST-O) of the Department of Agriculture.

Cuyco revealed this during Tuesday’s Senate hearing on the food security crisis triggered by the ASF outbreak.

He told senators that the BAI issued sanitary and phytosanitary import clearances (SPSICs) for meat products when that function, he said, is reserved for the National Meat Inspection Service (NMIS) under the Meat Inspection Code.

“The Congress of the Philippines has designated the NMIS. They [the BAI] took it from the NMIS. There are two that are at fault here: BAI for usurpation. NMIS for abdication,” Cuyco said, speaking partly in Filipino.

“That’s why the SPSICs and import permits are not being monitored,” he added.

Further, Cuyco pointed to the “weak” border inspection, which he blamed on the BAI’s legal “incompetence” for supposedly laying hold of an authority that was beyond its functions.

“The law says that matters pertaining to meat, meat product inspection, and meat hygiene — Congress says — is under the NMIS. But the NMIS has no personnel at the port. It was the BAI there.” he said.

Cuyco further said: “Quick look and luck. There’s no inspection at all. When the container is opened, what happens there is that the first thing you see is one or two masses [of meat]. Unless we conduct a 100-percent examination, we will not know what’s inside.”

He also blamed the issuance of clearances for pork imports coming from countries with ASF despite several memorandums banning such products from entering the Philippines.

According to him, former BAI officer-in-charge Ronnie Domingo violated three memorandum orders on the entry of pork imports from ASF-hit countries.

“So what your saying is, had he not violated or had he complied with the memos issued ASF would not have gotten into country?” Sen. Panfilo Lacson then asked the CREST-O official.

Cuyco said: “It would not have entered, sir.”

Domingo insisted, however, that the permits he issued were for “tail-end deliveries.”

“When we order a ban, it doesn’t mean that the next day no ships will arrive that came from those countries [with an ASF outbreak]. Those arriving in the next two, three months are tail-end deliveries that have a valid SP[SIC] from those countries when they still had no ASF [outbreak],” Domingo said.

He further maintained that the suspected cause of the outbreak in the Philippines was pork imports smuggled in from neighboring Asian countries hit by ASF in 2018.

On the other hand, Cuyco said the BAI had granted SPSICs for meat even to “ineligible importers.”

🛑WATCH LIVE‼️ Public Hearing of the Committee of the Whole April 27, 2021 at 10:00 AMAGENDA: P.S. Res. No. 685 – Inquiry on the Food Security Crisis Brought About by the Severe Outbreak of the African Swine Fever (ASF)

Posted by Senate of the Philippines on Monday, April 26, 2021

Cuyco also claimed that the BAI was rolling out an unregistered ASF test kit. He said the BAI supposedly would want the Food and Drug Administration (FDA) to “facilitate registration [of the kit] even if FDA lacks jurisdiction.”

But the current BAI director, Dr. Reildrin Morales, disputed this, saying that he did not know of any recommendation by the bureau for the FDA registration of the test kit.

He said the test kit was still under BAI evaluation. He added that the bureau was trying to give the product, which was developed locally, a chance in order to support the domestic researchers.

The test kits, according to Morales, are being used in Batangas “under controlled conditions.”

“Even if BAI issues an emergency use only certification for nanogold, it will fall under the framework of a validation process. It will not be for commercial use,” he added.

On Cuyco’s claims that the BAI assumed an NMIS function, Morales cited Republic Act No. 3639, which mandates the bureau to “oversee all matters concerning animal health.”

“Our importation of meat — of products related to meat, of live animals —these are known routes of potential infection. Therefore, it falls under the BAI,” Morales said.