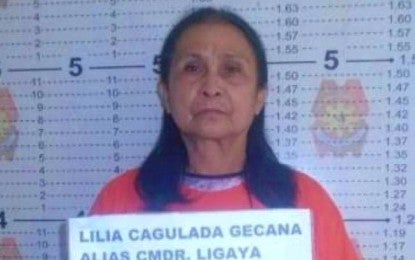 Gecana, aka Commander Ligaya, at the police station. CONTRIBUTED PHOTO

COTABATO CITY—Police in Cotabato province announced the surrender of what they said was a high-ranking communist guerrilla leader, who is facing multiple murder charges in a Kidapawan City court.

Gecana was part of NPA Guerrilla Front 72 and had been spokesperson of the women’s group Gabriela in Cotabato province, Melocotones said.

He said the police’s warrant officer last Sunday (April 25) got a text message from Gecana expressing willingness to surrender.

Gecana is currently detained at the Makilala police jail facility.

The controversial Anti-Terrorism Council (ATC), created by the new Anti-Terror law, has listed the CPP-NPA as a terrorist organization.

On Aug. 9, 2002, the United States also included the group on its list of terrorist organizations worldwide.