Senate can give NTF-ELCAC ‘zero budget’ in 2022, says Drilon

MANILA, Philippines — Aside from realigning this year’s budget of the National Task Force to End Local Communist Armed Conflict (NTF-Elcac), the Senate can also give the task force a zero budget next year.

Senate Minority Leader Franklin Drilon explained that the President has the power to realign this year’s  P16B  budget of the counter-insurgency task force to the pandemic response.

The Senate, meanwhile, can move to give the task force a zero budget in 2022.

“Theoretically, if we are minded…because of the position occupied or which  Parlade was designated, the Senate can give them a zero budget in 2022,”  Drilon told reporters on Monday, referring to NTF-Elcac spokesperson Lt. Gen. Antonio Parlade Jr. 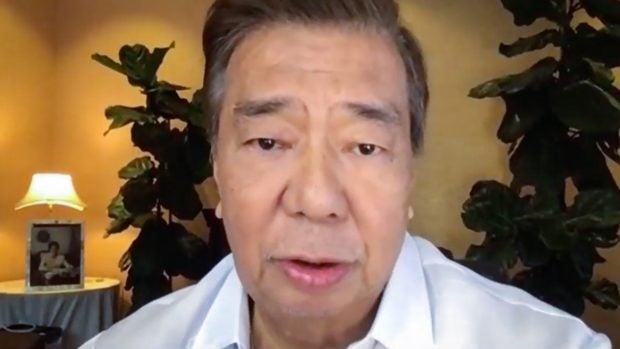 The senator insisted that  Parlade’s designation as spokesman of the task force was contrary to the Constitution.

According to Drilon, the Constitution clearly states that “no member of the armed forces in the active service shall at anytime be appointed or designated in any capacity.”

While he did not say the Senate would indeed give the counter-insurgency task force a zero budget in 2022,   Drilon noted that he had been opposing the P16 billion funding given to it this year.

Drilon nevertheless vowed to continue to scuritnize the NTF-Elcac’s funding when Congress starts deliberations on the 2022 national budget.

Drilon is also set to file a resolution, censuring Paralade for calling stupid those senators pushing to defund the task force.

Parlade drew the ire of senators anew following recent allegations of red-tagging and profiling of community pantry organizers by NTF-Elcac.

Read Next
S. Korea to partially lift ban on UK flights from May
EDITORS' PICK
Duterte to issue memo on face shields this week
Smart brings KCON:TACT especially 4U to subscribers from June 19 to 27
Gilas out to prove Korea win not a fluke; Tab fires back at ‘lucky shot’ remark
Young, Huerter help Hawks upset top seed Sixers in Game 7
DOH reports 40 more COVID-19 variant cases
Smart celebrates all kinds of ‘#SimplyLove’ for Pride Month
MOST READ
Duterte to issue memo on face shields this week
No plot to oust Pacquiao as PDP-Laban president in July meeting — Nograles
Probe troll farms, lawmakers urge
Palace: Face shields no longer needed to be worn outdoors
Don't miss out on the latest news and information.