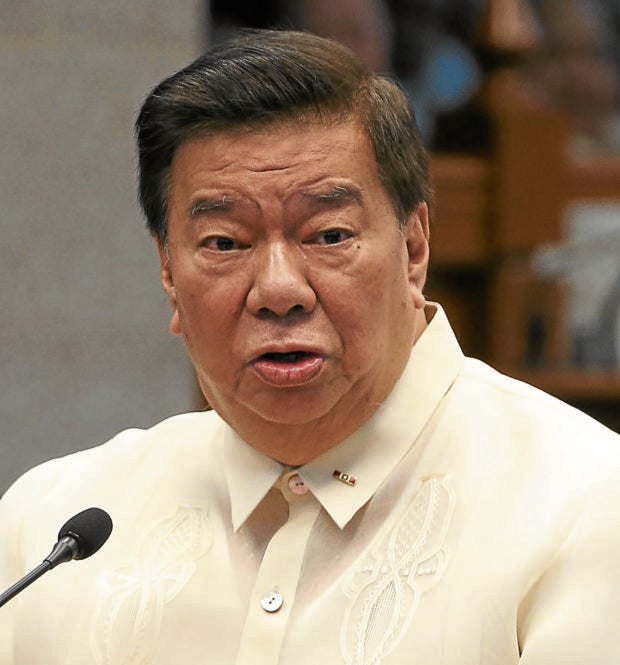 MANILA, Philippines — Senate Minority Leader Franklin Drilon on Sunday called on President Rodrigo Duterte to rally the country’s neighbors and allies to form a united front against China and its actions in the South China Sea.

Drilon said it was Manila’s “policy of appeasement and accommodation toward China” that had encouraged Beijing to ignore the Philippines’ protests and continue its occupation of waters well within the country’s 370-kilometer exclusive economic zone.

“Apart from the protests, which I support, we should, as an objective, get the other nations to confront China, including our allies—United States, Japan and Australia. We must unite against the unlawful Chinese incursion in the West Philippine Sea,” Drilon said.

He added that the 2016 ruling of the Permanent Court of Arbitration in favor of the Philippines should serve as its legal basis in “rightfully and forcefully asserting the country’s claims on the West Philippine Sea.”

The Philippine Coast Guard (PCG) and the Bureau of Fisheries and Aquatic Resources (BFAR) have stepped up the conduct of maritime exercises in the West Philippine Sea, according to the PCG spokesperson, Commodore Armando Balilo.

In a statement on Sunday, he said at least eight ships have been conducting such exercises since last week at Philippine-occupied Pag-asa (Thitu) Island and even Panatag (Scarborough) Shoal.

The Philippines occupies Pag-asa Island, while Panatag Shoal, a flash point between Manila and Beijing, has been under Chinese control since 2012 following a standoff in April that year.

“We are supporting the whole-of-nation approach in securing our maritime jurisdiction, especially the efforts of the National Task Force for the West Philippine Sea (NTF-WPS) to undertake maritime security, maritime safety, maritime law enforcement, maritime search and rescue, and marine environmental protection roles in our country’s waters,” Balilo said.

He said BRP Gabriela Silang and BRP Sindangan started their maritime training on Saturday near Panatag Shoal, while BRP Cabra, BRP Malapascua and four other PCG-manned BFAR vessels, including BRP Francisco Dagohoy, have been doing interoperability exercises near Pag-asa Island.

“Crew members of the participating PCG as well as PCG-manned BFAR vessels have started their intensified training on navigation, small boat operations, maintenance and logistical operations,” Balilo said, adding that the training may last up to two weeks.

The Philippines has deployed more patrol vessels to intensify surveillance in the disputed waters after the sighting of almost 200 Chinese ships at Julian Felipe Reef last month.

Most of the boats have since dispersed around the contested archipelago. China—which claims almost the entirety of the sea—has refused repeated demands by the Philippines to call back the ships, which Manila says are maritime militia vessels and Beijing says are fishing boats.

In response, the Philippines has deployed more patrol vessels, including PCG and Navy ships, to intensify surveillance and prevent illegal fishing. The Coast Guard drills began last week as Armed Forces of the Philippines held joint exercises with US soldiers that ended on Friday.

Beijing has ignored the 2016 international tribunal decision that declared its historical claim over most of the South China Sea to be without basis.

But once-frosty relations between Manila and Beijing have warmed under President Duterte, who set aside the ruling in exchange for promises of trade and investment.

The Philippine foreign and defense secretaries, however, have been engaged in a war of words with Beijing. The Department of Foreign Affairs has been filing daily protests over the Chinese vessels and, in a rare move, recently summoned Beijing’s envoy to express its “utmost displeasure” over the issue.