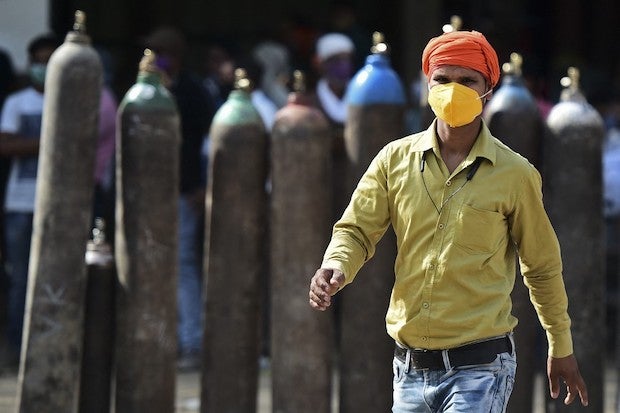 A man walks past people waiting to refill their medical oxygen cylinders for COVID-19 patients at an oxygen refilling station in Allahabad on April 24, 2021. (AFP)

NEW DELHI, India — India’s daily coronavirus death toll set a new record Saturday as the government battled to get oxygen to hospitals overwhelmed by the hundreds of thousands of new daily cases.

Twenty patients died in one night at one New Delhi hospital suffering from oxygen shortages, medical officials said. A Delhi court said that the new pandemic wave had become “a tsunami.”

Queues of COVID-19 patients and their fearful relatives were growing outside hospitals in major cities across India, the world’s new pandemic hotspot, which has now reported nearly one million new cases in three days.

Another 2,624 deaths were reported in 24 hours, taking the official toll to nearly 190,000 since the pandemic started.

More than 340,000 new cases were also reported, taking India’s total to 16.5 million, second only to the United States.

But many experts are predicting the current wave will not peak for at least three weeks and that the real death toll and case count are much higher.

Germany and Kuwait on Saturday followed the United Arab Emirates, Britain and New Zealand in restricting travel from the country.

Stung by criticism of its lack of preparation ahead of the wave of infections, the central government has organized special trains to get oxygen supplies to the worst-hit cities.

The Indian air force was also being used to transport oxygen tankers and other supplies around the country and to bring oxygen equipment from Singapore.

The government has also pressed industrialists to increase the production of oxygen and life-saving drugs.

One “oxygen express” carrying 30,000 liters for hospitals arrived in Lucknow, Uttar Pradesh state, where armed guards were waiting to escort trucks that would carry the oxygen to hospitals.

Lucknow has been one of the worst-hit cities, with hospitals and crematoriums inundated with patients and bodies. Officials said the liquid oxygen would only be enough for half a day’s needs.

Uttar Pradesh, a state of 200 million people, has imposed a weekend lockdown in a bid to curb the spread.

In Delhi, the city government said it would begin setting up buffer stocks of oxygen.

Delhi chief minister Arvind Kejriwal said, “The government should take over all oxygen plants through the army.”

Many patients are dying outside hospitals in the capital because of the lack of beds and oxygen.

Twenty patients at the Jaipur Golden Hospital in the capital died during the night as it suffered oxygen shortages, the hospital’s director told Indian media.

He said that at one stage on Saturday morning, the reserve was down to 30 minutes and pressure had been reduced for the 200 coronavirus patients, most of whom were on emergency oxygen.

One charity has set up an overflow crematorium in a car park, with makeshift funeral pyres built to deal with the mounting deaths.

A Delhi High Court hearing a special petition on the pandemic measures said Saturday: “We’re calling it a wave. It’s actually a tsunami.”