‘This is not out of desperation, but where else can we go?’ | Inquirer News

‘This is not out of desperation, but where else can we go?’ 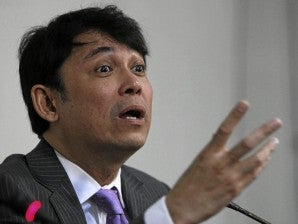 “We were put in a corner like a cat or rat. So where else can we go?” defense spokesperson Tranquil Salvador III told reporters Wednesday before the start of the impeachment trial of Chief Justice Renato Corona in the Senate.

Salvador said defense lawyers ran to the Supreme Court because the Senate impeachment court had granted the motion of the House prosecution panel to present as evidence Corona’s bank accounts.

“We already came to a point where we have to sit and rethink. We have to ask ourselves what’s happening now … and what we must do to protect the interest of our client,” he said.

“But this is not out of desperation. We have a process which we’re allowed to use under the Constitution,” he said.

Salvador insisted that the Senate should not have issued a subpoena for Corona’s alleged bank records since it was a violation of the bank secrecy law.

“The prosecutors should also be held liable for attaching bank documents which were considered confidential,” he said.

“Even some members of the bankers and banking institutions were concerned about the effect of the Senate resolution to the industry and the economy.”

Salvador said Corona’s pleading was “not intended to kill the trial, but to temporarily stop it.”

“We’re asking to pause and think about these events … while the Supreme Court is still determining the legality of the impeachment court’s resolution,” he said. “This is respect for the rule of law.”

Rico Paolo Quicho, another defense lawyer, said the decision to seek relief from the Supreme Court was a “wholistic approach” and a “culmination” of events which happened during the first three weeks of Corona’s impeachment trial.

According to Quicho, they opted to file the petition “because we cannot just let the prosecution trample on the rights” of the Chief Justice.

“It’s not as if we woke up one day and decided to ask to stop the proceedings. Our option to file a legal action intensified when the prosecution insisted to present evidence for Paragraph 2.4 which the Senate impeachment court had already disallowed,” he said.

“They were throwing everything at our client. They did not comply with the Senate resolution because of the liberality of the proceedings,” Quicho said.

“What the prosecution was doing is already gearing toward persecution. It’s not about justice anymore.”

Corona’s participation in the impeachment trial did not mean that he waived his right to question the proceedings in the high court, Quicho added. “The central issue here is the rights of an individual. We will not allow that the rights (of the Chief Justice) be violated,” he said.

“And asking a TRO from the Supreme Court is not extraordinary. This happens in any other judicial proceedings.”

Karen Jimeno, another defense spokesperson, argued that Corona’s petition did not include matters covered by the authority of the Senate convened as an impeachment court.

“We’re raising only questions of law. As stipulated in the Constitution, the Supreme Court was the right body to discuss matters concerning questions of law,” Jimeno said.

Jimeno said the impeachment complaint was “defective” because it did not pass the verification process as required by the Constitution.