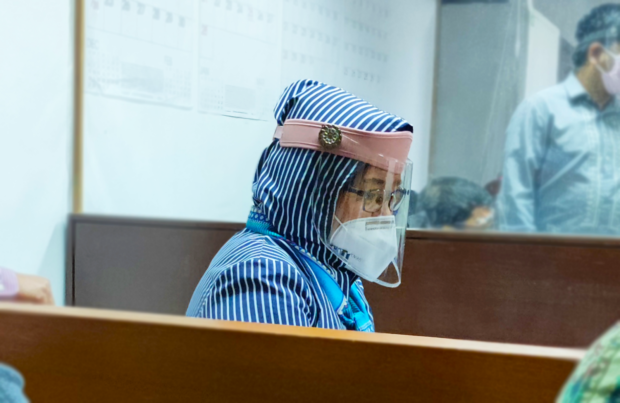 Detained Senator Leila De Lima, clad in PPE, attends the hearing of her drug case at the Muntinlupa RTC BRanch 256 for the first time  since the COVID-19 restrictions. Photo courtesy of Sen. De Lima’s office.

MANILA, Philippines — Senator Leila de Lima’s request for a medical furlough was granted by the courts following an appeal of her physician that she may have suffered a mild stroke while in detention on drug charges.

Both Branch 205 and Branch 256 of the Muntinlupa Regional Trial Court gave De Lima a three-day furlough starting on Saturday (April 24), at 10:00 a.m.

The courts’ separate rulings came after De Lima’s camp filed a very urgent motion for medical furlough last Wednesday, as she complained of headache and weakness. After being checked, her physician Dr. Meophilla Santos-Cao said that it might be possible that the senator experienced a mild stroke, which required being checked up and submitted to some tests not available inside Camp Crame.

De Lima is detained at the Philippine National Police Custodial Center due to drug-related charges stemming from her stint as Justice secretary during the term of former President Benigno Aquino III.

“Wherefore, premises considered, and finding the very urgent medical furlough to be meritorious, the same is hereby granted for humanitarian and health reasons.  Accused De Lima is allowed to go on a three day medical furlough immediately upon the receipt of this order,” Branch 205 Presiding Judge Liezel Aquiatan said.

“Accused De Lima is hereby given leave of Court to go on an emergency medical furlough […] at the soonest time possible for a period of not more than three days for her requested checkup,” Branch 256 Presiding Judge Romeo Buenaventura said in his order.

De Lima’s staffers said that the senator is doing well.

However, the order from Branch 205 stated that her doctor wanted to rule out a “cerebrovascular accident” which requires a Brain Magnetic Resonance Imaging (BMRI), a technology not available at the PNP General Hospital.

“Accused de Lima requests that she be granted permission to go on an extremely urgent emergency medical furlough and indefinite medical confinement […] and to continue until all the tests and necessary treatments have been performed to ensure her continued good health,” Branch 205 said.

De Lima assured both court branches that she would be shouldering all expenses due to her furlough, adding that she would not be staying longer than the conduct of the official tests. In response, Branch 256 said that De Lima’s lawyers are required to submit a written report on the medical status of De Lima and an explanation of her furlough.

“Should the diagnosis require the subsequent confinement of accused De Lima, her counsels are further directed to submit a separate motion therefor(e) supported by the necessary medical abstract/ certificate of accused De Lima’s physicians, copy furnished the prosecution,” Branch 256 said.

Both branches also explicitly stated that media coverage of the furlough would not be allowed, and lawyers and representatives of the senator are not allowed to give interviews or press statements to the media.

PNP officials have been directed to submit a report of compliance within five days of the medical examination.

This is not the first time that De Lima was granted a medical furlough.

Last February 9, she was allowed by the courts to go on a check-up outside Camp Crame for 24 hours. However, the reason for that check-up was merely on account of her age, and not on any grave health concerns.