Open-water swimmer to do 20-hour swim around Mactan Island, Cebu 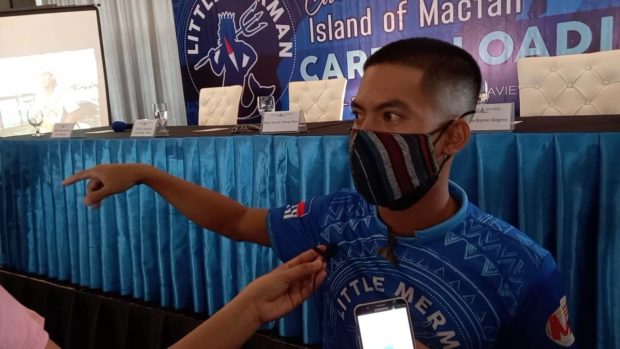 CEBU CITY –– Open-water swimmer Cleevan Kayne Alegres is all set to be the first man to make a 20-hour swim around Mactan Island, Cebu as part of the events leading to the 500th anniversary of the Battle of Mactan.

The 25-year-old native of Lapu-Lapu City will start swimming at 5 p.m. on April 25 and will be done by noon the next day, April 26.

The 42-kilometer swim, he said, is also a part of his advocacy to clean up the seas and oceans.

Alegres said he wants people to start cleaning up the Mactan Channel and the Cebu harbor.

“We need to protect our ocean and clean our seas. These are our treasures. I hope that one day the Mactan Channel will be full of fishes and even become a dive site,” he said.

He said he was also planning to swim around Cebu Island after completing the Mactan Island “circumnavigation.”

At 5-foot-3 inches tall, Alegres was dubbed the “Little Merman.” He prepared for the swim about a year ago at the beaches of Maribago in Lapu-Lapu City.

“It was a year-long preparation. While everyone was on lockdown, I was swimming. I did strength training, followed a healthy diet such as ditching soft drinks and alcoholic drinks,” Alegres said during a press briefing attended by Mayor Junard Chan and officials from the National Quincentennial Committee.

The young swimmer also practices “freediving” and spear-fishing.” This is where he noticed the small catch because of pollution.

Alegres said his swim would not be non-stop as he needs to stop after every 20 minutes. He will have a team with him to guide and provide him water.

Mayor Chan said the city would be giving “recognition” to Alegres during the 500th anniversary of the Battle of Mactan on April 27.

The battle commemorates the victory of local chieftain Lapu-Lapu and the natives against Portuguese explorer Ferdinand Magellan and the Spanish soldiers in 1521.