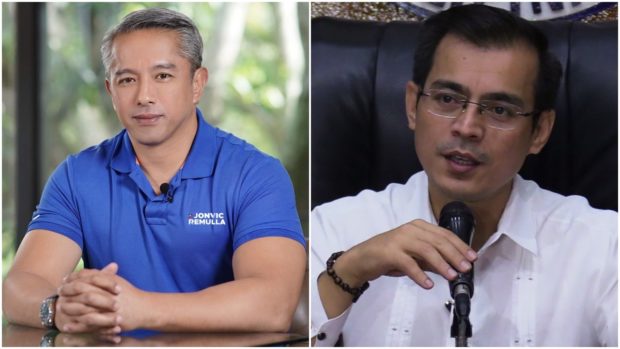 Remulla took up the cudgels for Dualan, who supposedly did not give or delayed giving the financial assistance to some residents of Naic who were informal settlers of the city of Manila and relocated to the province via the program of the National Housing Authority.

In a recent news report, Moreno, who was reacting to the ECQ aid distribution for the relocates from Manila, said: “Noong mga nakaraang ayuda, nagpadala ako doon. At kung may sosobra pa kami—kasi niyayakap din namin dito sa Maynila kahit hindi botante. And I hope they will do the same.”

(In past financial assistance programs, we distributed aid there. And if ever we would have a surplus — because here in Manila, we embrace even those who are not voters here. And I hope they will do the same.)

(You know, that’s a style of a traditional politician. Whether you’re a local voter or not. Since they live there already, next time they will register in that municipality and will not vote for that fool.)

This pronouncement of Moreno apparently did not sit well with Remulla, who asserted that those who moved to Cavite from Manila City are being treated as Caviteños.

Remulla explained that the funds provided by the national government for the ECQ aid were not enough and that the families who relocated to Cavite were not included in the 2015 census that served as the basis for the distribution of the financial assistance.

(Mayor, we all know your ambition to become President. There is no issue with that. Anyone is free to dream. But please do not step on others so you can rise up. You are not a President yet, but you’re already arrogant.)

(We are already having a hard time here but you even used us as a reason just because you’re too eager to shine. Hope you first analyzed the problem before you made those senseless remarks.)

Moreno should likewise not drag Caviteños if he wants fame, said Remulla.

(If you only want fame, you don’t need to step on a Caviteño. Do not pick on Caviteños. We won’t back off.)

Remulla likewise said that while the Office of the Governor is not involved in the distribution of the ECQ aid, he is in continuous coordination with the mayors in the province regarding their issues with distribution.

(What the mayor said about not giving financial assistance to those from Manila? This is due to insufficient funds from the national government based on the families affected.)

(The number of  SAP is based on the 2015 census. This means that the 1,092 families are still covered by funds under Manila and not Naic. They only transferred in 2019. So which mayor is holding the funds?)

#MedyoECQ Ep. 5 PERSONA NON GRATA “Ambition is vital, but dangerous; it is a keen motive and a driving force, but over…

INQUIRER.net has sought the comment of Moreno and his office regarding this issue but has yet to receive a reply as of posting time.

Read Next
US sends aircraft to aid in Indonesia submarine search
EDITORS' PICK
PDP-Laban exec insists Pacquiao didn’t criticize Duterte on West PH Sea issue
Tired of your Wi-Fi signal problems at home? Here’s a solution!
No trees will be harmed in building of Nayong Pilipino vaccination hub – DOT
Get a chance to win 5G smartphones with Smart Signature Plans
Time to hurry up immunization before vaccines expire – Bayan Muna
Marian Rivera partners with JC to boost public health awareness
MOST READ
Sharon Cuneta flies to LA to take some time off: ‘I need to breathe, collect myself’
U.S. sends envoy as Israel-Gaza barrages spiral, Hamas commander killed
Pangilinan: Is Roque getting his salary from China?
More Chinese maritime militia ships return to West Philippine Sea
Don't miss out on the latest news and information.