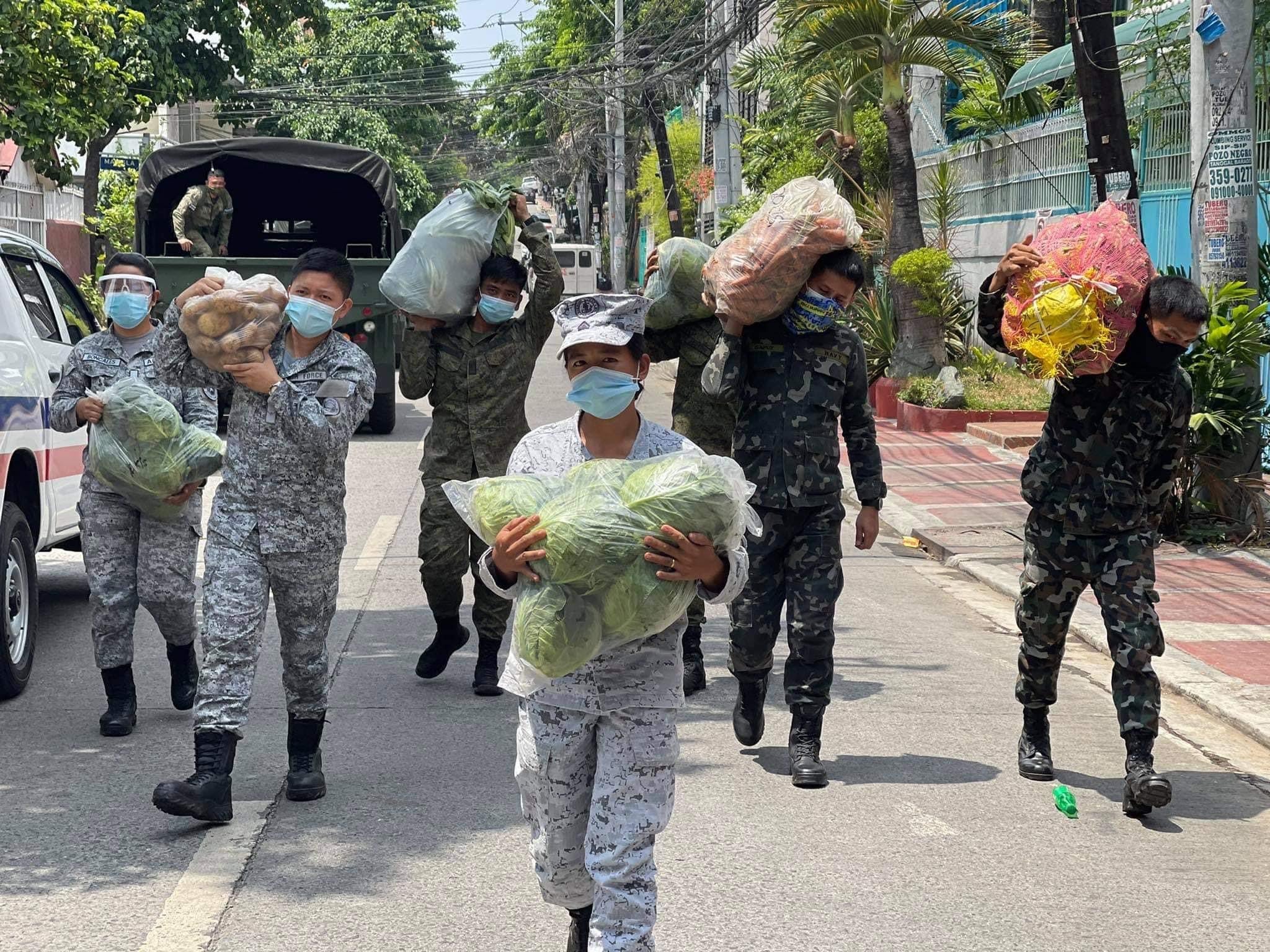 Soldiers donate vegetables to community pantries in Quezon City on April 22, 2021. Photo by ARMED FORCES OF THE PHILIPPINES

MANILA, Philippines—Top Philippine defense and military officials have expressed support for the highly-popular community pantries and even offered help following a backlash on red-tagging by some counterinsurgency task force officials against people behind the pantries.

“Kindness is everyone’s color,” said Defense Secretary Delfin Lorenzana in a statement on Thursday (April 22). “Regardless of beliefs, as long as the desire to help is sincere, we will support it,” Lorenzana said.

He said the defense department was ready to help if asked to do so by local government units in areas where the pantries have sprouted to provide free food to people suffering from the economic impact of the COVID-19 pandemic.

Armed Forces of the Philippines (AFP) chief Gen. Cirilito Sobejana said he was thinking of convincing soldiers to donate a day’s worth of their subsistence allowances to raise funds for the community pantries, which have mushroomed nationwide.

“I should say we are in turmoil with COVID-19, with what is happening in the West Philippine Sea, with our internal security problem,” Sobejana said. “We have many problems,” he said in Filipino.

“Now with COVID-19, some sectors of our society are locked down, they could not earn, that’s why this gesture of feeding our less fortunate brothers is a humanitarian action which your armed forces, being the protector of the people, is supporting,” Sobejana said.

The expression of support comes after some officials of the counterinsurgency National Task Force to End Local Communist Armed Conflict (NTF-Elcac), which had been given a P19 billion budget in 2021, claimed without evidence that some community pantry organizers had ties with communist guerrillas.

Sobejana said he has called the attention of Lt. Gen. Antonio Parlade, spokesperson of the NTF-Elcac, on his controversial remarks against the people behind the community pantries.

“I called the attention of General Parlade, I invited him,” said Sobejana.

“I reiterated to him my guidance that is be to be very deliberate and exercise due diligence in our all actions, may it be by words or in deeds,” he said. The two are classmates at the Philippine Military Academy (Hinirang Class of 1987).

Sobejana, however, declined to comment directly on Parlade’s allegations.

Parlade had alleged that leftist groups are taking advantage of the community pantries to paint a bad image of the Duterte administration.

Read Next
Wind signals lifted as Bising weakens, moves away from PH landmass
EDITORS' PICK
Ahead of ONE: Full Blast II, Mongkolpetch warns Elias Mahmoudi: ‘Watch out for my fists’
Synology NAS: A photo storage and multimedia server for your home
DILG takes over Cotabato town as all officials go on quarantine
Local gov’ts may start COVID-19 vaccination of poor residents using excess supply
Tighter curbs sought in provincial COVID-19 hot spots
Alex Eala wins Grand Slam on Independence Day: ‘I hope I made my contribution to the country’
MOST READ
‘Hindi pwedeng take 2,’ Sotto tells presidential, VP aspirants
Lacson: Kind-hearted Leni ‘in it to win’ presidency in 2022, but…
Liza Soberano’s ‘Trese’ stint defended by voice actor Inka Magnaye
Not even found in Tiktik: Another bad word snuck into DepEd materials
Don't miss out on the latest news and information.