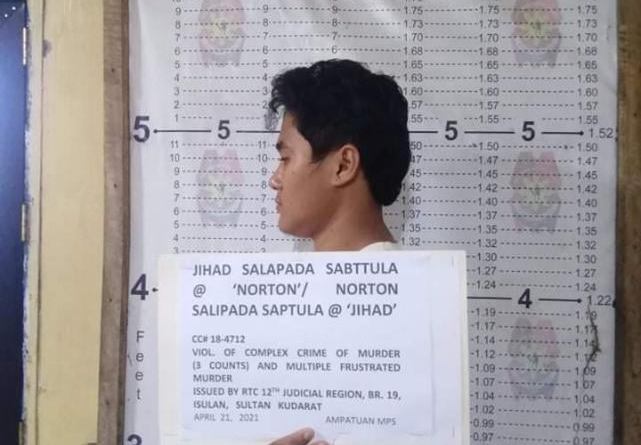 COTABATO CITY –– Police authorities in the Bangsamoro Autonomous Region in Muslim Mindanao announced the surrender in Maguindanao of a senior member of an Islamic State-linked group, who is a suspect in two bomb attacks in Isulan town, Sultan Kudarat in 2018.

Sabttula has arrest warrants for murder and multiple frustrated murders issued by the Regional Trial Court Branch 19 in Isulan.

He had been wanted for two bomb attacks in 2018 in Isulan that killed six and injured more than 50 others, according to Brig. Gen. Eden Ugale, BARMM police director.

Ugale credited Ampatual town officials, the Criminal Investigation and Detection Group, and the Maguindanao provincial police for the Sabttula surrender.

Sabttula was not presented to local journalists as he was still undergoing interrogation at the Maguindanao police office in Shariff Aguak town.

Read Next
Belgian ambassador to South Korea apologizes for wife’s ‘assault’
EDITORS' PICK
Manila is 78th most expensive city in the world for foreign workers
TeaM Energy pushes development programs to help in pandemic rebound
Want to help local farmers? Shop small and eat Real Food
Piolo Pascual: The Ultimate Heartthrob continues to level up
ICC is everything but a court of ‘white people’
Garcia softens stance, meets IATF halfway on swab-upon-arrival policy
MOST READ
Sharon Cuneta on living in the US: ‘Nagagawa ko lahat ng normal na bagay’
ICC is everything but a court of ‘white people’
After flying PAF jet, AFP chief vows more modern aircraft for PH defense
Duterte-Duterte tandem possible but ‘winnability is another question’ — Binay
Don't miss out on the latest news and information.