A whale chorus reveals how climate change may be shifting migration 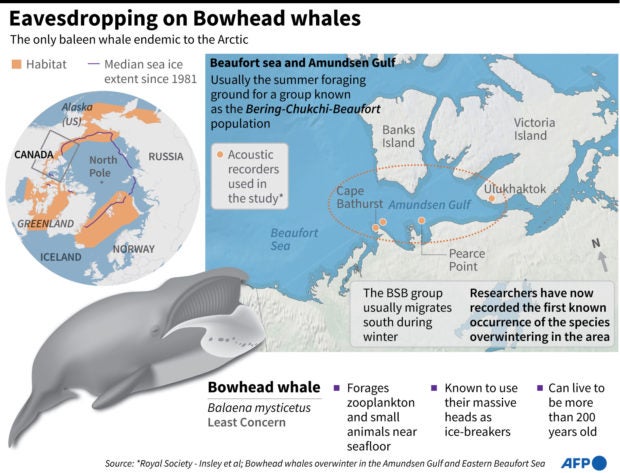 Graphic on the bowhead whales, the only whale species endemic to the Arctic. John SAEKI, Laurence CHU / AFP

TOKYO — Eerie wails, explosive trumpets and ghostly moans. The sounds from the underwater recorders had a story to tell, even without a single intelligible word: the whales had stayed put.

The recordings gathered during the 2018-2019 winter in the freezing Arctic waters off Canada proved that a population of bowhead whales had skipped their usual migration south.

Scientists believe this behavior — never previously detected — could be driven by the effects of climate change, and be a potential harbinger of shifting dynamics across the region’s ecosystem.

Ordinarily, the approximately 20,000 bowheads that make up the Bering-Chukchi-Beaufort (BCB) population around Canada have a fairly predictable migration pattern spanning 6,000 kilometers (3,700 miles).

They spend the winter in part of the Bering Sea, which lies between Russia and Alaska, and head north then east to the Beaufort Sea and Canada’s Amundsen Gulf in the summer, before returning in the autumn.

But in winter 2018-2019, something different happened. Residents in the Canadian region reported seeing bowheads long after they would normally have disappeared south.

A team of scientists decided to comb through hours of audio recorded by underwater devices that are dotted around the region for regular data collection, listening for unusual sounds.

They found them: the distinctive calls of bowhead whales that should have been in their southern winter grounds but had stayed put.

Assisted by a trained computer program, they even found recordings of bowheads singing, a behavior believed to be associated with mating, which has never been recorded in the summer grounds before.

The whale noises appeared in between 0.5 to 3.0 percent of recording files collected between October to April at four summer spots.

The finding was highly unusual: recordings from some of the same and separate sites in the summer grounds in previous years picked up no whale sounds after October or December, depending on the location.

“The evidence is clear that BCB bowheads overwintered in their summer foraging region in the eastern Beaufort Sea and Amundsen Gulf during the 2018-2019 winter and as far as we know, this is the first time it has been reported,” says the study published Wednesday in the Royal Society Open Science journal.

Less clear however is why this happened, with the authors positing various theories mostly linked to climate change.

One possible factor could be shifting ice cover, with less ice than usual seen in the summer grounds during the 2018-2019 winter season.

But the record minimum ice concentration actually came in 2015-2016.

That suggests “ice, and particularly timing and locations, is important but not the only factor,” said Stephen Insley of the Wildlife Conservation Society Canada, who helped lead the study.

Another possible explanation is “predator avoidance,” with the bowheads steering clear of orca whales that are more frequently seen in some areas as warming seas lead to decreased ice cover.

Other phenomena linked to climate change could also be at play, like the increasingly erratic and early summer plankton bloom — whales could be spending winter in their summer grounds to ensure they catch the key food source, the scientists suggest.

Insley suspects water temperature is playing a key role in the unusual behavior, with bowheads known to avoid water outside a narrow range of around -0.5 to 2 degrees centigrade.

So could the behavior be an adaptation to climate change, and if so, what does that mean for bowheads?

“It may be positive now, but not down the road when water temperature is warmer,” said Insley.

“It’s hard to say and that’s why we’re trying to keep an eye on it.”

Bowheads certainly wouldn’t be alone in reacting to a warming climate.

“The whole region is undergoing dramatic change and we’re just seeing the beginning of it. Many sub-Arctic species are moving north,” Insley added.

“It’s a complete ecosystem shift under way and there will be winners and losers.”

The team is continuing to record in the region and hopes to correlate its data with information about ocean temperatures to determine any link.

“If the avoidance of warm ocean temperatures were the primary driver of this anomalous behavior, it may be a significant warning sign for bowhead whales,” the study cautions.