Toronto area to close some workplaces amid COVID-19 surge 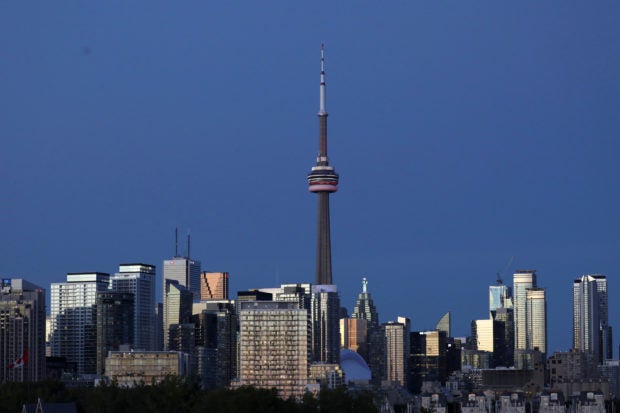 The CN Tower stands at dusk above office buildings and condominiums in the downtown core of Toronto, Ontario, Canada September 20, 2020. REUTERS/Chris Helgren

TORONTO – Canada’s biggest city Toronto and neighboring Peel, both of which are in the midst of a third wave of COVID-19 infections, on Tuesday said they would order businesses to close if they had outbreaks involving five or more people, medical officials said.

The closures would be for a minimum of 10 days if workers “could have reasonably acquired their infection at work,” according to a release from Peel Public Health.

Ontario Premier Doug Ford stopped short of closing workplaces like warehouses or manufacturers when he imposed a stay-at-home order over the weekend.

On Tuesday, Ontario’s science advisory table, which offers advice to the provincial government, called for paid sick leave, the closure of non-essential workplaces, and “public health guidance that works.”

“Our case counts are at an all-time high. Our hospitals are buckling. Younger people are getting sicker. The disease is ripping through whole families,” the science advisors said in the brief.

On Tuesday, Ford’s government appeared to open the door to implementing paid sick leave after months of refusing to do so.

Canada has been ramping up its vaccination campaign, but still has a smaller percentage of its population inoculated than dozens of wealthy countries, including the United States and Britain. On Tuesday, Canada extended travel restrictions.

There were 3,469 new cases in Ontario on Tuesday. Nationally, Canada has recorded an average of 8,680 new infections over the past week, a 7% increase from the previous seven days.

To accelerate vaccinations, Ontario, Alberta, Manitoba and British Columbia lowered the minimum age for recipients of the AstraZeneca Plc vaccine to 40 from 55. Quebec said on Tuesday it would lower the minimum age to 45.

Separately, the U.S. state of North Dakota will administer COVID-19 vaccines to Manitoba-based truckers transporting goods to and from the United States.

“With adequate vaccine supplies and all North Dakotans having access to vaccine … we want to do our part to ensure essential workers from Canada who are frequently traveling through our state are vaccinated,” North Dakota Governor Doug Burgum said in a statement.