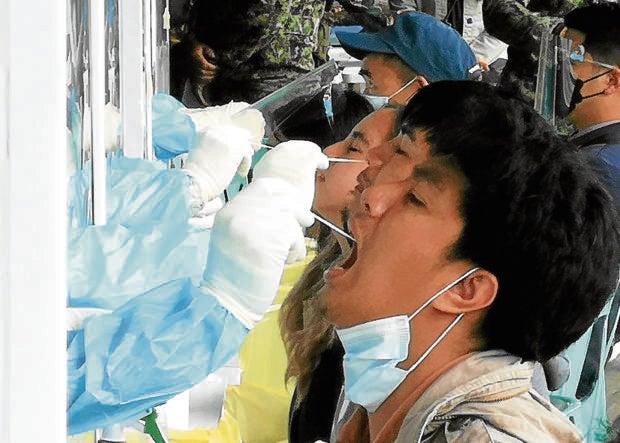 ACCESSIBLE Government and health officials in Baguio City have made COVID-19 testing accessible to residents and workers as the summer capital sees infections increasing. —EV ESPIRITU

The city’s latest patients afflicted with the UK variant were among 266 samples submitted to the Philippine Genome Center, Rowena Galpo, city health officer, said during a meeting with local officials on Tuesday.

Galpo said the recent UK variant cases in the city had raised to 17 its total cases of the B.1.1.7 strain of SARS-CoV-2, the virus causing COVID-19. Among them are a taxi driver and a nurse who returned home from abroad.

A patient in Abra had also been infected with the South Africa variant (B.1.351 SARS-CoV-2), she said.

The city recorded a total of 181 fatalities, which Mayor Benjamin Magalong described as an “alarming” development.

Some of the deaths involved people from other provinces who traveled to Baguio for treatment, he said.

COVID-19 transmissions have been high since March, which Magalong had attributed to the variants.

“That rose to 98 cases per day three to four weeks ago, but has now tapered down to 60 cases per day,” she said.

The number of patients has pushed the critical care occupancy rate in hospital facilities to 89.31 percent.

But the recovery rate of patients is over 84 percent, Galpo said.

Records showed that 104,832 residents had undergone testing, representing 27.9 percent of the population.On Monday, the city council tackled reform measures that would address a public health system that was initially unprepared for the pandemic.

The health crisis has revealed “how deeply fragmented” the public health system has become through the years, said Michael Capuyan, development management officer of the Department of Health (DOH), during the city’s council session.

But the integration of all health facilities under a single coordinator and increased manpower are solutions prescribed by Republic Act No. 11223 (Universal Health Care Act of 2019) which Galpo and the DOH asked the council to adapt in preparation for future pandemics.

Baguio is one of the local governments tasked to pilot a unified health program.

In Ilocos Norte, at least six more cases of the more contagious variants were recorded in the province on April 18.

A patient in Solsona town tested positive for the UK variant while three patients in Laoag City and one each in San Nicolas and Paoay towns had been infected with the South Africa variant.

A provincial health task force had set at least three days for the aggressive tracing of the patients’ contacts.

The provincial government said it would conduct a “house-to-house” tracing in villages where the six cases lived to ensure that the spread of infection would be contained.

So far, at least 300 contacts of the six new variant cases had been identified by health workers, Dr. Norman Rabago, provincial health consultant, said at a press briefing on Tuesday.