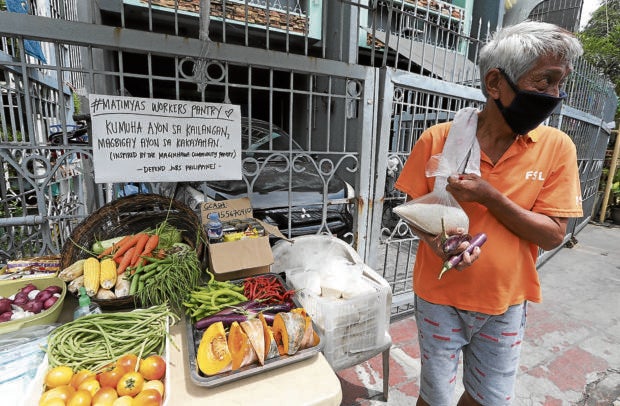 GET WHAT YOU NEED Inspired by the Maginhawa community pantry project in Quezon City, the labor group Defend Jobs Philippines has opened its own food station on Matimyas Street in Sampaloc, Manila, to help those in need. —NIÑO JESUS ORBETA

MANILA, Philippines — Community pantry organizers would need a permit from local authorities in order to ensure that social distancing and other health and safety protocols are followed,  Department of the Interior and Local Government (DILG) Undersecretary for Barangay Affairs Martin Diño said Tuesday.

(At first, only a few went there, but after the initiative in Maginhawa was featured by the media, people mobbed the place. The crowd was difficult to control, protocols have been violated.)

While the initiative of helping those in need amid the pandemic through community pantries is commendable, the DILG said it could also lead to the violation of health protocols.

(For me, the first concern, especially among barangays, is the barangay captain could face charges if there’s mass gathering. Even if you say it’s a form of food distribution or it’s because of the pantry, once people start to converge, there will be accountability.)

(What we’re trying to ensure is that protocols are not violated because instead of food distribution, it could trigger the transmission of the virus. The intention is good but we don’t want any violation of social distancing rules.)

Community pantries sprouted nationwide several days after a small business owner in Quezon City set up the Maginhawa community pantry, a bamboo cart with donated food and other essential goods.

Diño did not directly address issues on red-tagging when asked about this but instead maintained the need for protocols to be followed in implementing such community pantries. 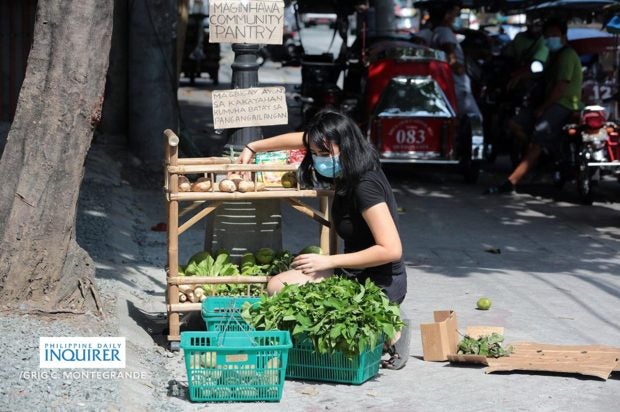 Ana Patricia Non refills the Maginhawa community pantry which she set up to help people badly affected by the pandemic. The pantry accepts donations such as canned goods, vegetables, vitamins and face masks. (INQUIRER/GRIG C. MONTEGRANDE)

(I saw what happened with Patricia. People really mobbed around her pantry because what she did was really commendable.)

He advised organizers of community pantries to coordinate with their local officials for the deployment of barangay tanods, who can help in enforcing protocols.