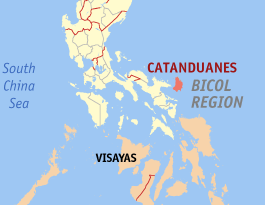 Roberto Monterola, chief of the Emergency Operations Center of the province, said landslides were reported in Barangay  San Vicente in Virac and Barangay Marinawa in Bato.

The road connecting Barangay Dugui Too and Hicming in Virac town was also closed due to a landslide.

Monterola also reported that a road that connects the villages of Codon and Asgad in San Andres town was also partially blocked after an electric post was toppled after strong winds and heavy rains softened the soil around it.

No one was hurt in the said incidents.

Meanwhile, a 25-year-old man was injured after he accidentally touched an electric wire and fell while fixing the roof of his house in Barangay San Vicente, Virac on Sunday morning, a belated report said.

The Municipal Disaster Risk Reduction and Management Office of Virac said the victim suffered from minor injuries and is now in stable condition.

As of 5 p.m., Monday, at least 11,956 families (47,045 individuals) were evacuated from areas vulnerable to flooding, landslides and storm surge.