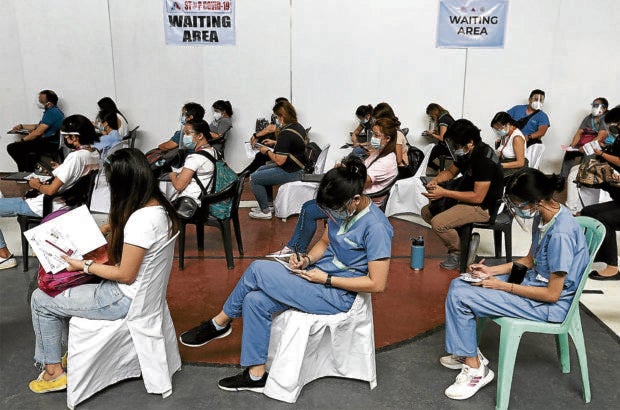 MANILA, Philippines — The Philippines has fallen short of vaccinating healthcare workers who are in the thick of the fight against the coronavirus disease (COVID-19), a World Health Organization (WHO) official said on Monday.

While noting the country’s current difficulty in accessing vaccines, Rabindra Abeyasinghe, the WHO’s Philippine representative, said “we need to still prioritize and ensure full coverage of the front-line health-care workers.” He stressed the importance of ensuring their protection before moving on to other priority groups.

So far, 63 percent of the healthcare workers have received the shots, Abeyasinghe said. “We are still short of protecting all the front-line health-care workers, and the current surge demonstrates that we need to have health-care workers fully protected so that they can work to care for the sick and help them heal.”

Disaggregated data from the Department of Health (DOH) showed that 960,191 health workers had received the first dose, while 191,982 had been fully vaccinated as of April 17.

Seven weeks since the March 1 rollout, 1.26 million Filipinos have received at least their first dose of COVID-19 vaccine, according to the DOH.

A total 1,456,793 vaccine shots had been administered as of April 17, the DOH said, placing the Philippines third in Southeast Asia in terms of number of doses given.

In a press briefing on Monday, Health Undersecretary Myrna Cabotaje said 1,264,811 people on the vaccination priority list had received their first dose. Of those vaccinated, 128,018 are 60 years old and above, while 176,305 have medical conditions.

“We continue to emphasize that let’s work on a priority basis to protect the front-line health-care workers and then move gradually to other groups that have been identified,” Abeyasinghe said in the Laging Handa public briefing.

Cabotaje, who oversees the vaccination rollout for the DOH, said many health workers still refused to get their shots.

She said about 54,000 who belonged to the three priority groups (health workers, seniors and persons with health risks) had deferred immunization. She cited as reasons sudden shoot-up of blood pressure, recent COVID-19 infection, pregnancy or simply not being ready for inoculation.

The government aims to vaccinate 70 million Filipinos, or 70 percent of the population, to achieve herd immunity.

So far, it has received a total of 3,025,600 vaccine doses, mostly Sinovac’s CoronaVac from China and a portion developed by the British-Swedish company AstraZeneca. Sinovac’s second dose is given 28 days after the first dose while AstraZeneca’s two doses are given four to 12 weeks apart.

All the 525,600 AstraZeneca doses provided by the COVAX global vaccine pool have been administered as first dose.

According to the DOH, Indonesia has administered 15,811,449 doses since Jan. 13. Like the Philippines, its available vaccines are those from Sinovac and AstraZeneca.

Singapore came next with 1,667,552 doses of the US-German Pfizer-BioNTech and the US Moderna, although it started its vaccination earlier on Dec. 30.

A member of the University of the Philippines COVID-19 Pandemic Response Team criticized the government’s claim that it was faring better than its Southeast Asian neighbors in terms of inoculating its population.

Peter Cayton said the vaccination had actually remained “relatively slow” since it began in March and that it was nearly impossible for the government to achieve its target of 70 million adult Filipinos vaccinated by the end of the year.

Cayton, a statistics professor, warned against using “raw data” or merely counting the number of doses to measure a country’s performance.

At Our World in Data, an online research and tracking platform, the Philippines actually ranked sixth in the region, with 1.15 doses administered per 100 people.

Myanmar, which is facing a military coup, even fared slightly better, with 1.91 doses per 100 people.

Countries at the bottom ranking, like Laos, Brunei and Vietnam, also have far fewer COVID-19 cases, and Cayton explained that they could have other mechanisms and health protocols already in place that they were no longer “gung-ho” about vaccination.

With only 1 percent of the target achieved and only eight more months left in the year, former government adviser Tony Leachon said the Philippines was “slow to act and late to queue up” for the vaccines that it could spell “deep trouble” as COVID-19 deaths continued to rise.

“In the next few months, the problem is not the supply but the administration of the vaccines. This is more difficult than securing the stocks,” Leachon said.

He added: “The government is too focused on getting the supplies but administering it is going to be a major challenge unless we change our approach.”

Abeyasinghe said the WHO was carefully looking at reports that there were indications of the airborne spread of the coronavirus. But for the agency, this is “not a big risk factor,” he said, citing its emphasis on controlling aerosol transmission.

“Unless we have a clear impact analysis of what degree of transmission can be attributed to airborne transmission, our primary focus should be on prevention of transmission through wearing of masks and hand hygiene that we have been advocating,” he said.

As for the use of N95 masks, he said this was relative to the risk of airborne transmission.

The WHO recommends these in situations where airborne transmission is highly likely, such as when medical procedures are being conducted.

—WITH REPORTS FROM DONA Z. PAZZIBUGAN AND MARICAR CINCO