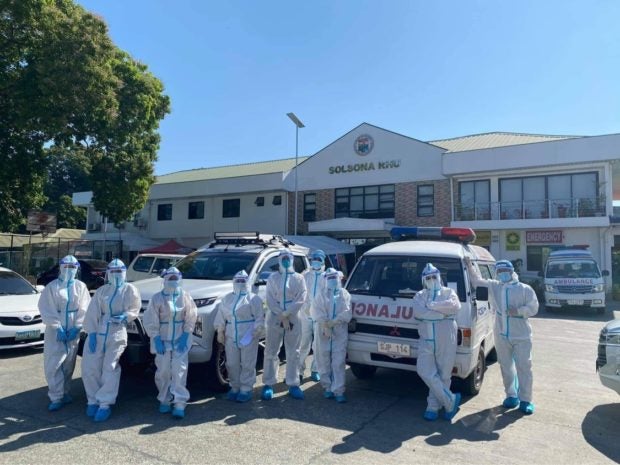 Health workers in Solsona town, Ilocos Norte province conduct extensive contact tracing after one of the previously positive cases in the town contracted the UK variant of SARS Cov2. PHOTO FROM SOLSONA LGU

LAOAG CITY—At least six cases of more contagious variants of SARS Cov2, the coronavirus that causes COVID-19, had been detected in the province of Ilocos Norte, officials said on Monday (April 19).

Health authorities said those infected with the variants were from this capital city and the towns of Solsona, San Nicolas and Paoay.

It was not immediately known of the cases had already been listed by the Department of Health (DOH) on Sunday (April 18) among 652 variant cases.

The patients had been in the COVID-19 tally of the province with their respiratory samples sent to the Philippine Genome Center (PGC) in March to detect other coronavirus variants.

Dr. Sheryl Racelis, epidemiologist, said at a press briefing last week that the only molecular laboratory in the province in the Mariano Marcos Memorial Hospital and Medical Center in Batac City had been sending samples weekly to the PGC.

Samples sent to PGC were from those who tested positive for SARS Cov2 with moderate to severe symptoms, said Racelis.

A week before, Ilocos Sur province had reported its first B.1.1.7 variant case found in a 58-year-old government employee.