Argentines rebel against new pandemic restrictions even as ICUs fill 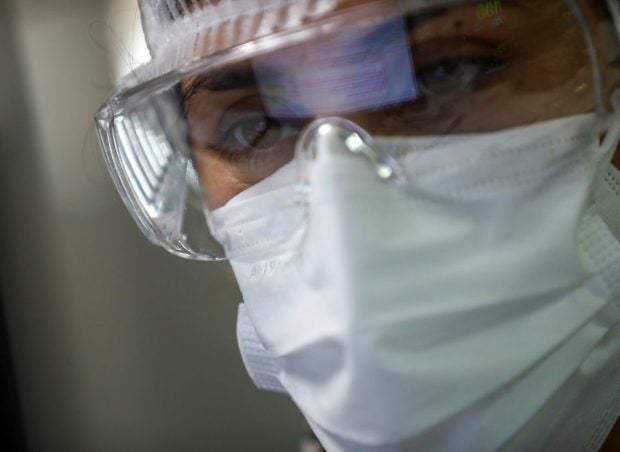 A healthcare worker looks at a computer monitor in an intensive care unit of a hospital prepared for patients suffering from the coronavirus disease (COVID-19), on the outskirts of Buenos Aires, Argentina April 16, 2021. REUTERS/Agustin Marcarian

BUENOS AIRES — Argentines around capital Buenos Aires are rebelling against tightened pandemic restrictions, brought back in this week as daily COVID-19 cases surged to record highs.

The country’s daily per capita cases have risen even above hard-hit neighbor Brazil.

The new measures kicked in on Friday. Set to run to the end of the month, there is an effective curfew after 8pm, indoor activities are banned in public spaces, and schools are closed.

But many restaurants, gyms and bars appear to be defying government orders.

In the Buenos Aires neighborhood of Almagro, bar owner Marcelo, 63, said he did not intend to abide by the new regulations that only allow outdoor seating, saying he needed to protect the business he had run for 18 years.

“The president does what he has to do. I do not agree with these measures,” he said. “Last year was very tough.”

When the coronavirus first appeared in South America last year, Argentina brought in a strict lockdown that initially kept a lid on cases but choked an already ailing economy in recession for the past three years.

Cases ended up rising regardless as many Argentines were forced out of doors to make a living as poverty rates shot up to 42% by the end of the year.

Buenos Aires restaurants got together to form an ‘Upside Down Chairs’ movement to present a united front. The group said in a statement on Friday it would not abide by the lockdown decrees, which it said marked a “new attack against the sector.”

The restrictions have already sparked a battle between the federal government of center-left President Alberto Fernandez and Buenos Aires’ city mayor who strongly opposes the school shutdown and has said he was not consulted on the measures.

Fernandez says the country needs to gain time in the battle against the virus after daily cases hit a record 27,000 earlier this week. The South American country has recorded over 2.6 million cases and is nearing 59,000 deaths.

“For me we can’t have this rebellion,” Fernandez said on Friday, adding that the government was rolling out subsidies to help business owners until the restrictions could be lifted. “I am not going to tolerate letting them do what they want.”

On Avenida Corrientes, long-known for its theaters and cafes that attract crowds well into the night, one gym on Friday had its entrance blind half up, with clients going in.

“At the moment we are still open, like all gym chains,” said an employee who did not want to give her name.

At a bar, an employee who gave her name as Verónica said the venue was continuing for now to serve inside. “We have only four tables outside, so it doesn’t work,” she said.

Parents in the city, who have already faced almost a full year of school closures, have also railed against the shutdown.

“We Argentines are outraged; we are tired of them doing whatever they want with us,” said Monica Cura, a mother taking part in a noisy pot banging protest on Thursday night.

“This has reached a limit. We want the children to go back to school. The school is their life, and we are very sad… we can’t stand it anymore.”

In a hospital in La Plata, outside the capital, the signs of the struggle with rising cases was clear, however, underscoring the complex balance between closing down the fragile economy and protecting the health service.

“There has been an incredible explosion of cases,” said Sahar Tal Benzecry, 41, an intensive care doctor, adding that the hospital was at close to full occupancy of its intensive care unit (ICU) beds and warning people could be left in corridors if the trend continued.

“We are all exhausted and the system is asking us for more and more all the time. We know that we have just started, it has only been ten days since we started like this and we have two or three months ahead,” the doctor said.