Bacolod visual artists turn to their craft to inject hope, positivity amid pandemic 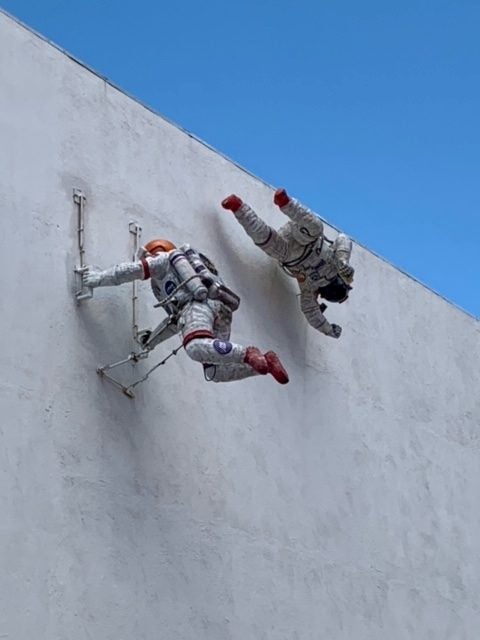 BACOLOD CITY – Instead of doing nothing, visual artists in this city turned to their craft to instill hope and positive emotions amid the coronavirus disease (COVID-19) pandemic.

The 8,000-square-meter Art District in Barangay Mandalagan is now bustling with public arts, including murals and sculptures, 60 percent of them made during the pandemic.

“Art brings hope and heals viewers and the artists in these trying times. The artists never stopped creating, and we saw that public art was like a beacon of light amid all that has been happening in the country and the world,” Co said.

“I think, in a way, we have given hope for this generation not to give up despite the challenges of this pandemic,” he added.

Among the 24 artworks made by about 50 artists are two astronauts seen floating on the side of the wall.

Co, who, with another artist Neil Benavente, led the creation of the artwork, said the astronaut sculptures symbolize that the sky is the limit for artists even amid a pandemic.

Tourism Secretary Bernadette Romulo-Puyat urged people to visit the Art District, where one could spend a whole day finding inspiration and feeling invigorated by the display of Filipino creativity.

“One of the many fun ways to get to know a destination is by exploring their creative work. This is why I highly recommend visiting the Bacolod Art District—a place that has cultivated an incredible art scene where you can discover Bacolod’s homegrown brand of creativity in its many galleries, artist-run shops, and cafes, in one spacious compound,” she told the Inquirer.

“Truly a must-visit destination in Bacolod for every tourist,” she added.

On almost every wall of the Art District, murals with varying messages abound. It also showcases sculptures and vintage cars where visitors pose for selfies.

A sculpture garden with a red carabao made by sculptor Rafael Paderna and Co is also attached to the side of the wall.

A grotto or a natural or artificial cave of Santa Muerte or Holy Death was put up as “a testament to the cycle of life and death, and the assurance that things continue to go on.”

Co said most of the works at the Bacolod Art District were made during the pandemic because there was a lot of time to do it, especially with the restrictions imposed to stop the spread of the virus.

With a grant from the Mercedes Zobel Foundation, Co said they have also been able to provide honorariums to artists who have participated in creating the artworks during the pandemic.

Several pieces of artwork inside the Art Gallery are for sale.

“The COVID lockdown has led to more people buying artworks. Perhaps this is because people have more money to spend since they cannot travel, and since they have been locked down they want to beautify their homes, Co said.

He said plans to put up the Orange Gallery started after he met Lopue at a gas station in 2005.

He said Lopue asked him if he would like to put up a gallery in one of his buildings in Barangay Mandalagan.

Co said he took up Lopue’s offer and opened the Orange Gallery that became a hub for artists. 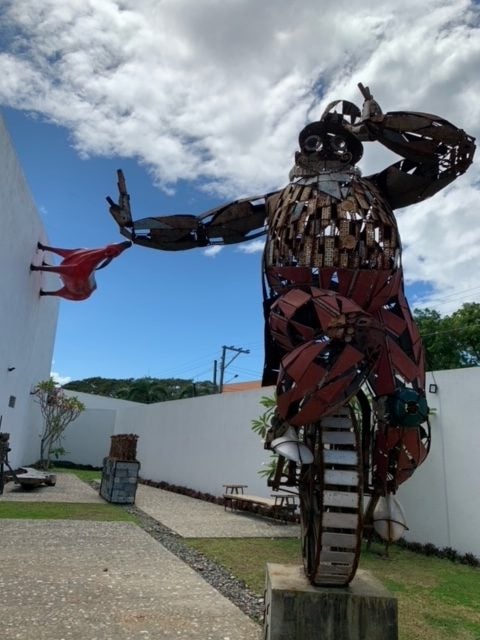 In 2008, on his return from an art residency in Beijing where he visited the 798 Art District, a one-kilometer hub for contemporary art, Co said he relayed everything he saw to Lopue.

“I think that is what inspired Bong Lopue because in 2011 he named his 8,000-square meter property where the Orange Gallery was located into the Art District,” Co said.

The Orange Gallery, which was located in a space at one of the buildings on Lopue’s property, now has its separate building co-owned by Co and Lopue.

Aside from the Orange Gallery, the Art District now has four other galleries: Block 17, Grey Room, Studio 57, and the Art Association of Bacolod.

It is also home to the Safe House, a mini theater for locally produced films, art talks, and poetry, a tattoo studio, ballet studio, and eateries with festive murals by local artists, making it a one-stop place for art lovers.

The creation of more artworks at the Art District, which include transforming garbage bins and flowerpots into works of art, is ongoing.

Among the art installations that catch one’s eye upon entering the Art District is the Corazon del Arte (Heart of Art) by artists Megumi Miura in collaboration with Brandon Braza, Zabiel Caro Nemenzo, Zander Lopez, and Zanna Jamili.

Since the pandemic has restricted people from traveling to other places, visiting the Art District becomes an alternative.

“Art District enables people to encounter real artwork in an open space and not virtually, which has become the near norm since the pandemic,” Co said.

All their programs at the Art District, he said, are focused on helping the younger artists.

“What I am doing now is putting the infrastructure so that when I retire, the next generation will be ready to continue (what we started),” he said.