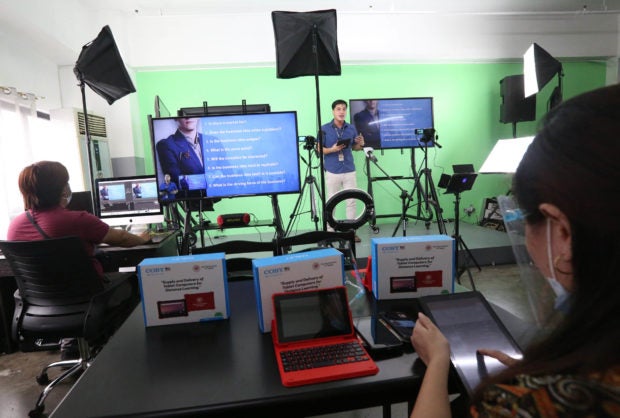 ONLINE TEACHING HUB A university professor teaches a subject in what used to be a classroom, now filled with cameras, TV screens and lighting equipment. —MARIANNE BERMUDEZ

MANILA, Philippines — Teachers’ groups slammed over the weekend the Department of Education (DepEd) for doing nothing to protect its stakeholders and instead participated in violating their civil rights and democratic processes.

Instead of abiding by democratic traditions taught in schools, the Alliance of Concerned Teachers (ACT) said the DepEd had even become complicit in the violation of the constitutional rights of its constituents.

ACT said in a statement that Revsee Escobedo, undersecretary of DepEd, had instructed division offices to disseminate an online survey meant to profile teachers who are members of ACT or the Teachers’ Dignity Coalition (TDC) for no specified reason.

ACT has been tagged by the controversial National Task Force to End Local Communist Armed Conflict (NTF-Elcac) as a leftist and communist organization although it has not filed charges nor offered evidence of criminal activity.

The form required teachers to input their full names and email addresses, and state whether they were members of ACT, TDC or both.

Basilio said it was similar to the police’s nationwide profiling of ACT’s members in 2019, when authorities made rounds of various DepEd offices and pressed officials to release the names of teachers who were part of the organization.

He said ACT had been trying to clarify the matter with Education Secretary Leonor Briones, but she has ignored all their requests for a dialogue.

“Since mid-2019, we’ve made several requests for dialogue with the DepEd on various concerns in education and none have been approved despite our status as a duly recognized representative of public school teachers. And now this dubious move. Why and what for?” Basilio said.

He noted that Briones “has done nothing” to protect its teachers from such actions that later led to the detention of at least two teacher-unionists.

“The TDC leadership despises this action, and thus, will instruct our members not to participate in this survey/profiling/inventory, which has no clear objectives and [is] hastily done through Google Forms, text messages or phone calls,” Basas wrote Briones.

He also said teachers’ right to freely organize without intrusion or fear of reprisal from authorities was guaranteed by the Magna Carta for Public School Teachers and the Constitution.

ACT Teachers Rep. France Castro also deplored the profiling of teachers and said the DepEd should instead address teachers’ needs.

Castro lamented that DepEd has prioritized the profiling of its teachers over their needs for a vaccine against COVID-19, salary increase, gadgets and internet allowances and the safe reopening of schools.

“Now, DepEd is eating its words and even joined NTF-Elcac in the profiling of teachers and violating their right to organize and their right to privacy,” she said.

“This profiling attempt by the Department of Education is no different and poses the same threat against the safety and security of the members and leaders of ACT,” she said, adding that teachers are not terrorists.